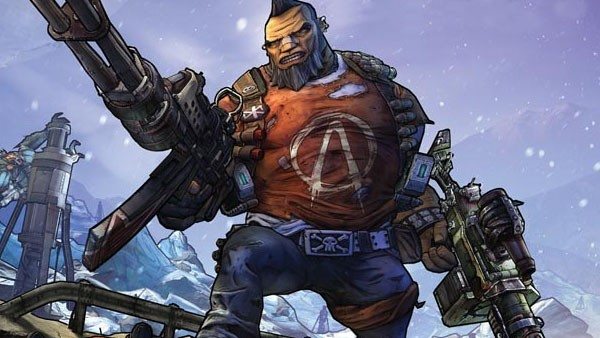 Borderlands 2 is getting an increase in the brutality according to the newest issue of Game Informer magazine.  The tried and true four player cooperative play will return in the sequel, but the enemy AI has been enhanced greatly according to the first details from Gearbox.  The game will host a much more interactive envrionment that offers dialouge and class based enemy characters.  A new currency system will also be implemented and can be used for a number of upgrades to you arsenal, with both weapon and vehicle upgrades mentioned in the preview.

Many of the original Borderlands characters will return for Borderlands 2, but Gearbox has revealed some details about the newer character which is seen in the image above.  Meet Salvador.  Salvador likes long walks on the beach, deep conversations, beards, and dual weilding weapons while mowing down enemies.  Borderlands 2 will feature completely re-designed weapons, and each will be tailored to fit into the personalities of the fictional manufacturers  ie: Jakobs etc.

More Borderlands 2 information is likely on the way but until then, chew on those tiny morsels.