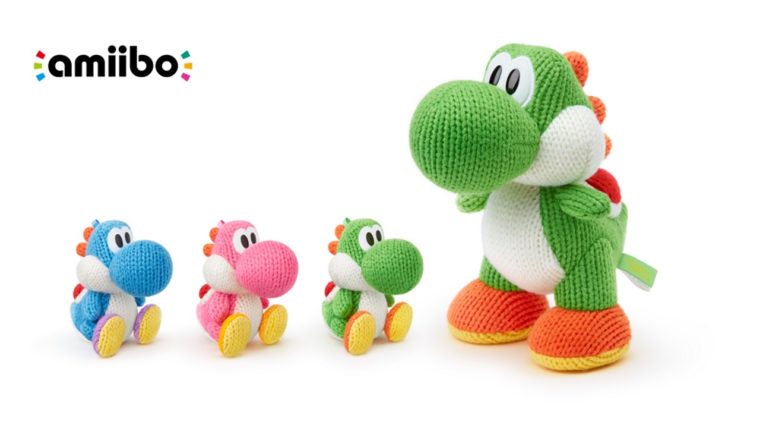 Coming out of nowhere, Nintendo of Europe has just revealed the existence of a Mega Yarn Yoshi Amiibo. The figure follows the design of the original Yarn Yoshi Amiibo, but is much bigger. We don’t have official dimensions just yet, but from the pictures supplied so far this thing is going to be huge.

About the size of the Gamepad itself, Mega Yarn Yoshi will easily be the biggest Amiibo available when it launches on November 15th in the US and November 27th in Europe. The figure itself will be made of wool, just like the three other Yarn Yoshi Amiibo figures, and the actual game character it is mimicking.

To use the Mega Yarn Yoshi Amiibo all you have to do is place his left foot onto the Wii U Gamepad just like you would with any other Amiibo. As far as compatibility goes, it will obviously work with Yoshi’s Woolly World, though whether it will simply act like its smaller brethren, or feature some unique functionality is not known at this time, though indications are that it will be the same.

(Update: “When tapped to the GamePad controller in Yoshi’s Woolly World, Mega Yarn Yoshi activates “Double Yoshi,” a second Yoshi to use at any point in the middle of a stage, as well as the ability to save a player’s favorite Yoshi pattern to the amiibo. The standard Yarn Yoshi amiibo also enables the same functionality.”)

The suggested retail price for the figure is currently set at $39.99, which could be changed for other markets, including the US. Yoshi’s Woolly World is available now in select markets and launches on October 16th in the US.