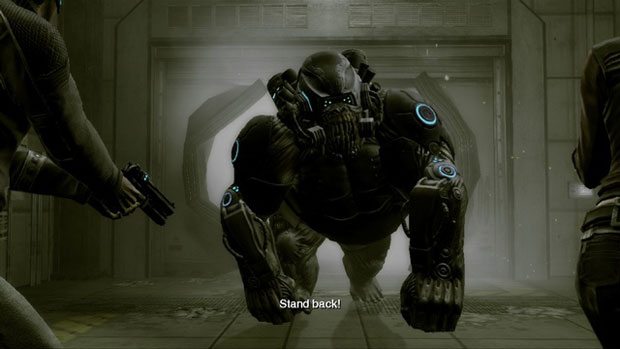 AD 2031…A new era. Sophisticated and complex technologies are now contributing to the advancements of mankind. However, the world’s governments are crumbling, new corrupt powers arise and conspiracies proliferate. The truth behind the proscribed technology could destroy the very core of humanity. Join a rogue team of agents as they fight for survival and entangle themselves deeper into the mystery. Mindjack is a third person cover based shooter at it’s roots.  Published by Square Enix and developed by Feel Plus,  Mindjack would most certainly appeal to the players who like a Gears of War type of shooter style game or cooperative online experiences.

Mindjack is one of the most unique gaming experiences I have played in quite some time.  Setting aside some of the points I will address later in this review, Mindjack includes a fresh take on both the multiplayer and cooperative experiences in this release.  As mentioned, the core of the game is definitely third person cover based shooter.  But the real substance in Mindjack is the gameplay, outside of the shooter mechanics.  As you progress through levels in Mindjack you will down enemies, which means they will down but not out.  At this point you are give the option to mindhack them.   If you do,  they will help you fight against the remaining enemies in the level.

There are times when your character will be downed himself.  Which will put you in a hack mode, allowing you to jump into another character on the board.  If you are playing by yourself you can hack into your A.I. ally.  Or you can hack into any of the computer characters that you have mindjacked on the board that are still alive.  Even further there are civilians peppered in throughout the levels that can be mindjacked as well.  The only real way to completely fail a level is if there are no hosts to hack into. At which point the level must be restarted.  Sound confusing?  It is, a little bit.  Though it’s done really well for the most part.

Mindjacking is certainly the shining point of the experience.  It also carries into multiplayer as well as you can hack into other games on the network.  By hacking into another persons game you can align yourself with other players, or try to impede their progress through the level.  In either case it’s kind of fun, but working together takes a great deal of teamwork.

Hacking into another players game was not without problems.  The host can boot you at any time, and I didn’t play a match where I wasn’t booted from the game because my side was winning.  Which was often, and this certainly isn’t a brag as much as it is a bit of a flaw in some of the level design for both sides.  Because with the dynamic of being able to hop in and out of characters the action gets quite hectic.  And there are many times when it seems that hero side is at a disadvantage.

Mindjack is made up of many bite sized levels, think Vanquish if you’ve played it.  It gives the game a lot of accesibility on both the online and solo components.  You can hack into a game and play a round of co-op or adversarial having it be a short and satisfying experience.  These small levels combined with the exp system in place give it a fun fast paced feel.

Whether you are playing the game in solo, cooperative, or adversarial mode, you will be unlocking EXP points as you go.  Like many other games the points you earn increase your level.  As your level increases you will unlock perks for your character.  These perks, gameplay tweaks, and clothing options are a nice added bonus to keep you plugging away in either mode.

Outside of the hacking  gameplay elements, Mindjack is a rather shallow experience.  The story is loosely thrown together and actually there’s a great chance that you don’t make heads or tails of it even after completing the single player portion of the game.  Trying to piece together what is going on in Mindjack is a trying experience.  Watching the opening credits for the game you would think something completely different than after playing the game’s opening sequence.

The game tends to leave alot of the details very fuzzy, and never quite explains what the hell is actually going on.  This is also combined with a lot of senseless cutscenes where the main characters make pointless remarks.  It would have given the player a lot more incentive to push through level after level of shooting gallery style gameplay if there was some sense of urgency or end goal that was unfolded throughout.

There really isn’t though.  Well not for awhile at least.  The central characters are still a mystery to me, as well is the actual mindjack process.   The main character is introduced to you in the intro of the game, and then you are thrust into a testing center of some sort where you learn the controls of hacking into a host.  All of the sudden you are an agent of an unknown organization tracking a female that supposedly looks like a friend of yours.  Then the plot stops developing for a solid 4 – 5 levels.

The game reeks of the strong smell that the developers had a great idea for the gameplay mechanics but didn’t quite have a solid story to back it up.  Why there are waves and waves of people after you is a mystery that isn’t unfolded til the end, but it’s pretty much an afterthought anyway.

The graphics in Mindjack leave alot to be desired.  It was actually quite hard to put my finger on why the graphics in Mindjack were bad.  And the best I can come up with is that it’s a number of things.  The first is that the game has a very dull and boring look to it.  Set in a an obviously dreary and bleak future, Mindjack’s color palette is somewhat muted.  Combining the lack of color with a general flatness to your surroundings just give the game a very meh feel to it.

Some pieces look ok, and it’s not that the game looks horrible by any means.  It just has this average feel to it that is inescapable.  At this stage in the generation of consoles Mindjack feels like a game made on the front end of the generation and less like something new and cutting edge.  I suppose generic is a good word for it.  All of the environments have a generic and very sterile feel to them.  Enemy models which you will likely be looking the most at, all have the same generic styling with very little if any alterations distinguishing them apart.

There is no interaction with the enviroment, and no effects that have a lasting impression on the gameplay, absolutely no aftermath of the gunfight that just popped off.  All in all Mindjack is an average looking game at best, whether judging the game from in-game action to cutscenes.

With all of the good gameplay elements that Mindjack brings to the table, it is saddled by a poorly executed cover system with equally flawed enemy A.I. among other things.  One of the worst features a game can have is poorly implemented controls.  Mindjack has this in spades in the biggest part of the game, which is the shooting, cover, and melee.

When trying to utilize the system that Gears of War made so famous, many developers make this huge mistake with the system.  Peeking out of the cover or leaning out of the cover leads to just shooting the cover instead of the target.  The reticule lines up as a clean shot, but you end up emptying a full clip into the barrier or wall or whatever it is you are relying on for reprieve from enemy gunfire.

Depending on which character you are controlling, the controls are equally cumbersome.  Vaulting, reloading weapons, and even hacking into other characters just seems to have a delay which make utilizing some of the fun features of the game uninviting.

And while your character is slow and unresponsive, the enemy characters move frantically, and the end result is a spastic shooting gallery where enemies seem to duck in and out of cover at break neck speed.  The motions lack any and all fluidity for the enemy, and on screen it looks like 2 frames.  One he’s there, the next he’s not.  Perhaps a few more frames in those animations would have made for a smoother transition.  I am not a designer so I don’t know.   What I do know, is besides awkward gunplay, enemies will just break off and run in non-sensical directions.  And the sluggish reticule movement of your character almost always makes tracking a single grunt style enemy that is off on one of these tangents a real pain in the ass to take down.

There is an inclusion of a melee control which should effectively work against the movements listed above but it doesn’t.  You get close to them the game prompts you to press the melee button and nothing happens.  It prompts you again, and again nothing happens.  Occasionally it will connect, but not until after the enemy has been downed by your partner or mindjacked A.I. allies.

From the moment I started Mindjack I wanted to like the game.  The hacking gameplay elements  are a breath of fresh air in a fairly tired genre.  However, the mindjacking and hacking elements of the game obviously cannot stand on their own two feet as a game in itself.  The flawed mechanics of the core shooter gameplay completely outweigh the innovation.  As fun as it is to hack into someones campaign and give them a run for their money, it is plagued by the many shortcomings that I listed above.   Coupled with average graphics and a non-existent storyline Mindjack ended up feeling completely generic even with all of it’s exciting possibilities.