Minecraft and Fallout Combine in New Mash-Up Pack for Consoles

The latest news in the world of video games at Attack of the Fanboy
December 15th, 2016 by Kyle Hanson 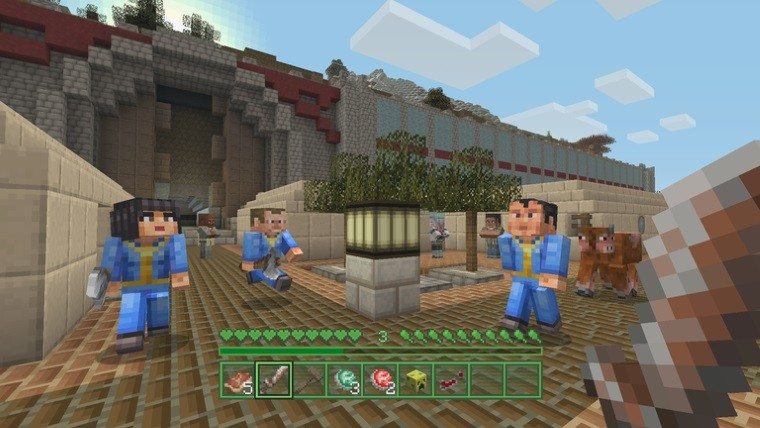 Mojang and 4J Studios have just announced the new Minecraft Fallout Mash-Up Pack, which will be coming to all console versions of the game soon. Minecraft’s many console versions may lag behind their PC counterpart in the feature department, but the amount of special content seems to make up for it well. This is just one of a few such mash-up packs, which combine with licensed skins and other DLC to create a very rich experience for players.

Of course, the downside is that much of this content does cost money, with the Minecraft Fallout Mash-Up Pack costing $5.99. The cost might be worth it though, as this is a very cool reworking of the Minecraft experience. Textures and mobs have all been altered to fit with the Fallout theme.

“Working in the depths of their bunker complex, our artists and builders have been busy blasting Minecraft’s glorious overworld into an irradiated wasteland fit for Fallout fans to wander,” reads the announcement from Mojang. “Friendly cows, gently sauteed in the light of a thousand suns, have now sprouted second heads, while the familiar supersized spiders have made way for other overgrown arachnids, who scuttle through the dark wielding brutal stingers.”

“Even the UI has been given a retro-futuristic overhaul in honour of Fallout’s wristmounted computing device, the Pip-Boy! The mash-up also comes with a soundtrack combining familiar tunes from across the Fallout series – so you can keep dancing til the end of the world.”

No firm release date was given outside of “coming soon” so just keep an eye out for more news later on. The Minecraft Fallout Mash-Up Pack will be available on Xbox One, PlayStation 4, Wii U, Xbox 360, PlayStation 3 and PlayStation Vita, which covers all currently available console versions of the game. Sometimes there is a delay between arriving on certain consoles, so be ready for that if it happens here.