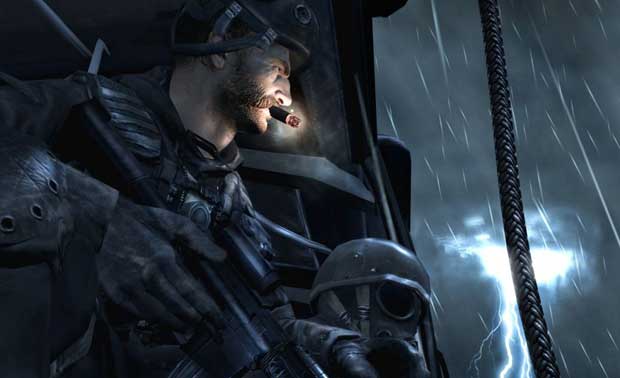 Creative Strategist for the Modern Warfare franchise, Robert Bowling, is revealing all he can about Activision’s upcoming shooter, Call of Duty: Modern Warfare 3.  Fans of the franchise have plenty of questions about the game, and what kind of changes are coming that they should be aware of.  Activision revealed a good deal of content at E3, finally taking the game from under wraps, but Bowling has taken to Reddit in an Ask me Anything session to answer as many questions as possible.

The session which touches on topics like Quick Scoping (yes it’s returning) to the XP system and much more.  Here are some choice blurbs from the Q&A.

Redditor: Despite Call of Duty being a team based game the gameplay encourages and rewards lone-wolves who ignore the objectives for kills, what’s being done about that? Why for so long has a team based game been so focused around being a selfish douchebag?

Bowling:I completely agree and we have changed a lot of how XP, match bonus, challenges, rewards, and other incentives are distributed in objective gameplay, much on how we are encouraging gun on gun gameplay in TDM modes, in objective modes we are making it so being an objective focused player in objective gametypes.  Furthermore, we have focused a lot of the new equipment additions in multiplayer to make sure were giving the objective player just as many tools to be better at playing the objective focused gametypes as we do a TDM player.  Its not all about kills, we have to reward the defender of a bomb site, the flag runner, and the guy covering the flag runner, more so than the guy just getting kills and never going near the objective points.

I read you loud and clear and while I can’t go into further detail, this has been addressed.  I’m a hardcore SnD player and a Dom player after that.

Redditor:  Alot of the MW3 footage looked very similar to MW2, what is MW3 doing to differentiate itself from previous games both in terms of singleplayer and multiplayer?

Bowling:From a story stand point, Modern Warfare 3 is a direct sequel – picking up just hours after Modern Warfare 2 ended.  The big difference, from a single player campaign standpoint, in Modern Warfare 3 is the scale of the levels you’re fighting in. Like going through the streets of Manhattan both on foot and in-air, or Paris, or London, or parts of Africa. The sizes of the campaign levels are massive, which required a lot of work in terms of advancing the streaming tech to not only get to that level of scale but to maintain the game running above 60 fps at all times.

From a multiplayer stand point its all about polish and balance. Taking all the feedback from Modern Warfare 2, building up from the core design philosophy of Call of Duty 4 (the simplistic beauty of fast paced gun on gun focused gameplay), keeping what we loved, losing stuff we (including you) didn’t, and adding in stuff that will change up the way we play.

Redditor: Why should I buy MW3 instead of Battlefield 3?

Bowling: You should be buying both because they both will be stellar games. I refuse to say one ill word of Battlefield 3 or DICE because I think they’re both fantastic and am good friends with several of the guys on the team.  If you are a shooter fan, they are both fantastic games to own because of one reason. They are different.  Each do their own thing in a fantastic way and it is refreshing to have the option for both styles.

Redditor: Were you surprised at the backlash to COD: Elite?  How do you feel about Battlefield’s similar service?

Bowling: I was not surprised at all, because it positioned poorly and misunderstood.  If I thought I had to pay for stats, groups, clans, the ability to change my class on the fly online or on my phone, and all the other features they announced. I’d want it for free too.  Luckily, all that IS free for everyone, but people didn’t know that.  I think these are services that all shooters should eventually have one day, and I’m stoked we’ll have them free to everyone for MW3 and am glad that DICE is doing the same.

Q:  Unlike Black ops, you guys are committed to 60fps on all consoles. Does the same apply to resolution (Will PS3 version be gimped to 540p, or both run at 600p?)

B:   The frame rate (always above 60 FPS) and resolution will be the same across all platforms.

Q: This runs the IW 4.0 Engine Correct? Care to outline any adjustments made to that? (Streaming tech, etc)

B:  No, this runs on the MW3 engine, which would typically be named IW5 but out of respect of our co-development partners at Sledgehammer games we are simply referring to it as the MW3 engine. It is upgraded from the engine we used in Modern Warfare 2. There have been a lot of advances, mostly in streaming tech to allow us to get the scale of levels we’re doing in Modern Warfare 3 and maintain gameplay consistency with the framerate and smoothness. We’ve got a lot of audio stuff mostly adding situational awareness like bullet wizzbys and other subtle upgrades. A lot of lighting stuff updates as well.

Q: Will dive to prone/dolphin dive be present in MW3?

B:  No, there is no dive to prone in Modern Warfare 3.

Q:  Can you comment at all on the IW/Activision/Respawn suit? If not, understandable….However my main concern is that MW3 will lose the IW “look and feel” with a whole new team working on it. So I ask you, to answer in all honesty,  does this play like MW2 and COD4?

B:  I absolutely can not comment on litigation. To me the game plays like Call of Duty 4 in terms of gameplay style, but with the smoothness of MW2 plus the new advances we’ve made. Furthermore, its not an all new team. We do have new people, but less than half left, with a lot of MW veterans remaining who continue to be passionate about the franchise.

Q:  Invite system on the PS3 is something that IW always screws up (no offense). Please make private matches private, and introduce a similar invite system that black ops used.

B: We’ve been doing a lot of work on private match, especially on PS3 and plan to address this issue for you.

B: Yes, and we’ve removed Commando.

Q:  Balance Noob Tubes..they were obviously OP in MW2….You and I both know that :)

B:  Explosives as a whole have been re-balanced to make them the support tool they’re intended to be not a primary weapon of attack.

Redditor: Will there be a MW3 MP beta?

Bowling:There will definitely be an internal one, but we haven’t decided or confirmed if there will be a public one. A public multiplayer beta is a give / take in terms of development schedule. It takes a good month out of your schedule to prepare it for public consumption and actually have time to incorporate the feedback.

In the meantime, while that’s decided, I’ve been flying community members out to Infinity Ward to see the game (not play yet) but to see and discuss it and give feedback. Furthermore, we will fly out members of our glitcher community to give the MP a run through its paces later in development to try to find map holes, glitches, and other exploits prior to release. We also have a full-time QA department.

Redditor: What would you say is YOUR favourite aspect about MW3 that differs from previous Call of Duty games?

Bowling: Spec Ops Survival mode, solely because it brings a lot of stuff to the game that we’ve never done before, plus you get to use a lot of Multiplayer features without worrying about them being over powered (since its co-op and not competitive MP), so you get to do shit like have an awesomely powered ACR and take on bomb dogs with Juggernaut and it doesn’t matter if its completely ludicrous since it all takes place outside the story mode. Its all about just having fun.

Redditor:  How are you approaching the player investment side of things? Will we see the return of Black Ops’ custom emblems, or MW2’s stock list of emblems and titles, or maybe something completely new?

Bowling:We want to reward players for specific actions and have their rewards reflect the type of player they are or their accomplishment, as well as focus and invest your time in a specific style and be rewarded for that.

So if you’re an objective player, your unlocks would be objective focused. That was the original design goal of Callsigns in MW2, was for you to be able to represent at a glance the type of player you are and the accomplishments you’ve made.