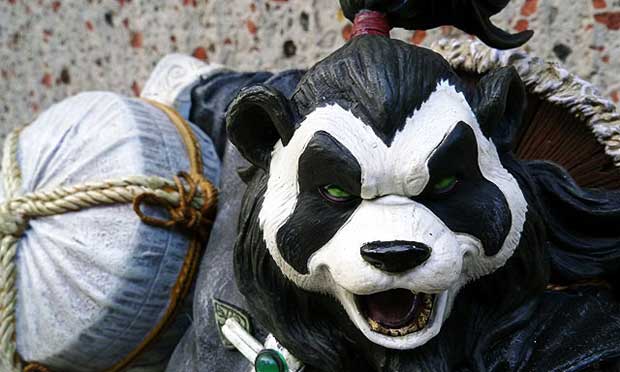 World of Warcraft‘s new expansion, Mists of Pandaria, was officially announced today and Blizzard is now releasing a steady flow of information for players to whet the appetite of WoW players everywhere. The new race adds a brand-new player class: the martial-arts-focused Monk. Players will have their hands full exploring the mysteries of the exotic Pandaria and advancing to the raised level cap of 90, but they will also experience a range of new content and game features.

“Players have been asking to see the pandaren in World of Warcraft since the game’s launch, and we’re excited to finally be able to give them a proper re-introduction to Azeroth,” said Mike Morhaime, CEO and cofounder of Blizzard Entertainment. “In addition to the new playable race and class, Mists of Pandaria contains a huge amount of new content, and we’re looking forward to sharing more information about all of it at BlizzCon and beyond.”

In a recent press release, Blizzard highlighted some of the backstory that surrounds Pandaria:

In the upcoming expansion, players will be able to explore the long-lost continent of Pandaria, which has remained hidden from the world since the sundering of Azeroth over ten thousand years ago. In the aftermath of the Cataclysm played out in World of Warcraft’s third expansion, Pandaria’s heroes are emerging from their land’s lush forests and cloud-ringed mountains to choose sides in the escalating war between the Alliance and the Horde and to share the extraordinary secrets of their ancient martial arts. As tensions between the factions near a breaking point following the discovery of this new world, players will be called upon to explore Pandaria’s exotic expanses, make contact with its strange indigenous creatures, and unlock the world-changing secrets that have been hiding in the mists for millennia.

Check out the host of features that Mists of Pandaria will offer. There will certainly be more to come as Blizz-Con rages on:

New Playable Race — Pandaren: Adventure through Azeroth as World of Warcraft‘s first neutral race and decide whether to side with the Alliance or the Horde.
New Playable Class — Monk: Unlock the secrets of pandaren martial arts and do battle as a damage dealer, healer, or tank.
Level Cap Increased to 90:Learn potent new spells and abilities while exploring uncharted zones and taking on challenging new content.
New Zones:Explore the lush Jade Forest, treacherous Kun-Lai Summit, and other exotic areas of Pandaria designed for high-level characters, and uncover the mystery of the Wandering Isle.
Scenarios: Join up with some friends to achieve a common goal, such as mounting a defense against invading monsters, in a flexible new type of PvE challenge.
Dungeon “Challenge” Modes: Master the ultimate five-player time trial to earn prestige rewards in a new dungeon mode that will put your resolve and coordination to the test.
Pet Battles: Challenge other players’ companion pets with your own collection in a new tactical mini-game, and find out who’s king or queen of the pint-sized battlefield.
New Talent System: Customize your character to suit your play style with the newly overhauled and improved talent system.