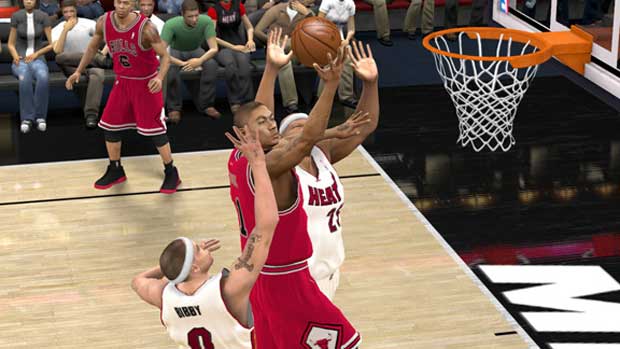 The NBA finals that were conducted, had the Bulls winning it all after falling behind 3-1 before rallying to win in seven. The deciding game 7 of the finals had NBA MVP Derrick Rose scoring 42 points to take home the championship hardware, and Dirk Nowitzki choking with only 17 pts in the deciding game.

Meanwhile, in real life, both Conference Finals are tied at 1-1

The Bulls out-rebounded Miami in five of the series’ seven games, and the duo of Joakim Noah and Carlos Boozer combined for more than 17 rebounds per game.
Rose had a stellar series; averaging 32.4 points a game to go with 7.6 assists.
LeBron James (27 points, 8.6 rebounds) and Dwyane Wade (25, 5.6) played well in defeat.

Kevin Durant averaged 33 points and nearly 11 rebounds a game, but Dirk Nowitzki (30, 9) matched him every step of the way.
The aging Jason Kidd showed he wasn’t ready to retire, averaging 7 points, 5 rebounds, 8 assists, and 3 steals during the seven game series.
NBA Finals:

Rose had ice in his veins under pressure. In the deciding Game 7, Rose sealed the title with a 42 point performance.
The Bulls’ role players came up huge when it mattered. Luol Deng’s 33 points in Game 5 helped get the series back to Chicago, while Carlos Boozer’s 23 point and 17 rebound performance forced a Game 7. Boozer and Joakim Noah combined for 27 points and 17 rebounds in the clincher.
Despite a stellar performance from Nowitzki throughout the series (25 points, 8 rebounds), he mustered just 17 points in Game 7 on 6-14 shooting.