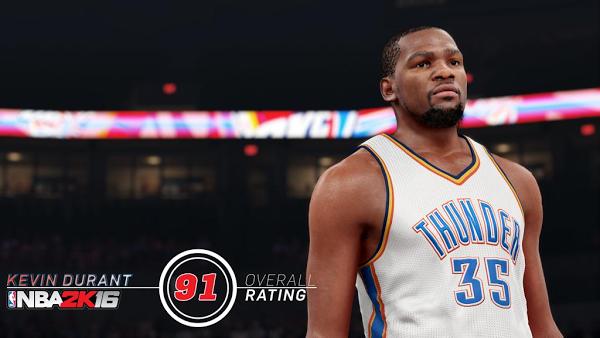 Kevin Durant has revealed his player rating for NBA 2K16. He also revealed a screenshot of himself in the game too.

Durant made the announcement on his official Twitter account. The high player 91 rating means he could be one of the best players in the entire game.

Although Kevin Durant’s player rating in NBA 2K16 is lower than what he received last year in NBA 2K15. 2K Sports awarded him a high 95 rating when that game launched last October. A 91 rating is not bad, but it’s still a drop.

It’s hard to judge on Durant’s skill since he was injured for the majority for the 2014/2015 NBA season. 2K Sports probably made an estimate on how well he will play in the upcoming 2015/2016 season instead. He’s likely to be back better than ever.

Last year, they only had four players over the 90 rating. It’s likely only a few current NBA players reach that high too. Players like LeBron James and Stephen Curry are sure to be the best two current players in the entire game.

If you factor in older players, nobody can really match up against Michael Jordan. He usually gets a 99 overall rating each year…