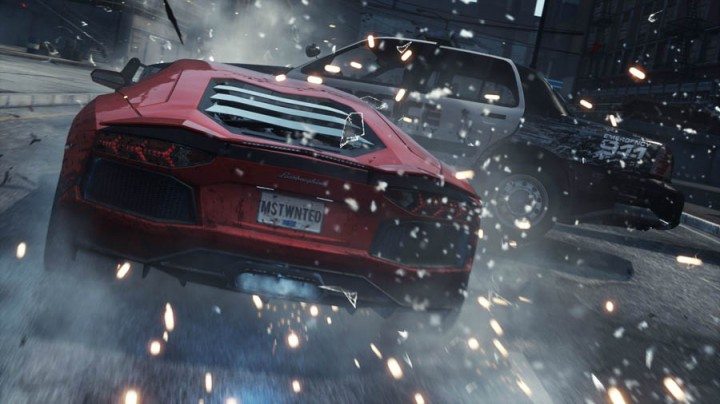 I got hands-on with Need for Speed Rivals at Eurogamer Expo 2013, and decided to write an opinionated preview.

Need for Speed has never been the most realistic driving game. It’s far from a simulator, because it isn’t trying to be. Having said this, the visuals on Rivals were impressive. Weak scenery shattered realistically and flew towards the screen as your car plowed through it, while the reflections of the sunshine in the puddles on the road were a nice touch.

Getting back to how the game actually played though; it felt familiar at first, having played Most Wanted, EA’s most recent installment in the driving series. Further into the demo I was playing, things started to get a bit strange. The car swerved and veered violently on the road from minimal steering, and crashes often looked bizarre. The cars didn’t seem to have a particularly good sense of weight to them, and when they crashed they just sort of came to an unnaturally quick stop.

My experience with it was far from exclusively bad though. It was enjoyable drifting round corners at high speed while keeping almost full control of the car, and the new Pursuit Tech was effective and powerful. But herein, a problem develops; with weapons, cars that don’t handle very realistically and surreal crashes, is Need for Speed too arcade-y?

Not in my opinion, but if you’re a stickler for realism, or have avoided the Need for Speed series in the past because it was too far from a driving simulator of you, then don’t get excited about Rivals. I preferred Most Wanted, because it was fun and fast but not too serious, but Need for Speed Rivals is dangerously close to the ‘not serious enough’ mark for me. If you prefer driving games that are more serious, check out my preview of Forza Motorsport 5.

I obviously wasn’t playing the finished version of the game however, which has various launches from November 19th to 29th depending on platform and region, so there’s plenty of time for me to be proved wrong. To be honest; I hope that I am, and there will be some tweaking done to the version I played before it releases.