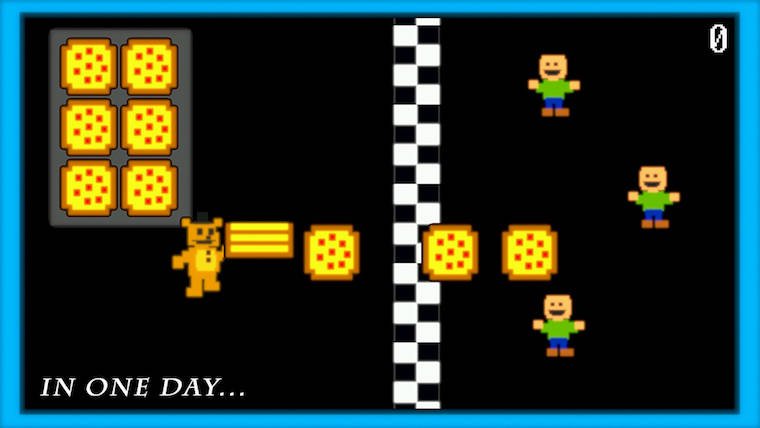 Last week, Scott Cawthon, the man behind the Five Nights at Freddy’s franchise, stated that he would not allow the year to end without getting out another game. Details were vague, but now a new teaser gives us more to go on, including a possible release date.

Yesterday (December 3), Cawthon updated his previous Steam post with the following addition: “I’ll get the Steam page up within the next few days for the new game, so be watching for it!” Additionally, Cawthon’s webside, ScottGames.com, updated with a new image of an 8-bit Freddy throwing pizzas at children with the text “In two days…” Today, the image has been updated to read, “In one day…” So something is coming tomorrow. It’s possible that the game is coming out tomorrow, but it could also be that the game’s Steam page is going up tomorrow, but the game may not be available for a few more days, or maybe the game’s trailer is coming out tomorrow. I guess we’ll see in just a few hours.

The fan community is convinced that this new game will be the Five Nights at Freddy’s tycoon game that Cawthon has been teasing throughout the year. One fan also claims to have confirmed that the name of the game will be Freddy Fazbear’s Pizzeria Simulator. I couldn’t find where this fan was getting their information from, but we’ll probably have this and other questions answered tomorrow anyway.