The latest news in the world of video games at Attack of the Fanboy
September 18th, 2017 by Dylan Siegler

A poster advertising the upcoming Pokémon games Ultra Sun and Ultra Moon was recently posted online. The image of the poster was originally posted on NeoGAF and seems to hold some interesting implications for the new games. 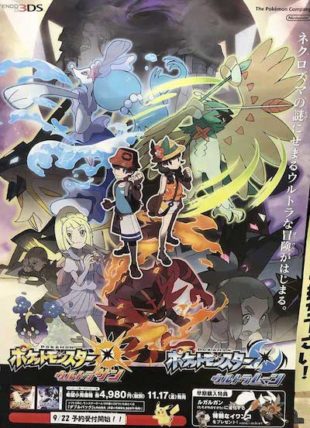 On the poster, we see some of the important characters from the original Sun and Moon, Hau, Gladion and Lillie, who has a Cosmog next to her. The center of the poster is occupied by the new player characters, who are surrounded by the final evolutions of the three Generation Seven starter Pokémon. Off to the sides are the new forms of Necrozma, Dusk Mane and Dawn Wings. Towards the top of the poster appear to be indistinguishable new characters.

Polygon recently published an article discussing how Lillie’s appearance on the poster (wearing what she calls her “Z-power form” outfit as well as holding a Pokéball) implies that she has accomplished her goal of becoming a Pokémon Trainer and will possibly return in the new games to reunite with Nebby, the Cosmog she traveled with in Sun and Moon, and become its trainer. I respectfully disagree with this premise.

Some players may remember that in the original Sun and Moon, Nebby evolved into the Solgaleo or Lunala that the player ultimately has to catch. So if Ultra Sun and Ultra Moon do in fact take place after the events of Sun and Moon, it wouldn’t make sense for Lillie to reunite with Nebby as a Cosmog, since when she left for Kanto, Nebby was fully evolved.

So how do we make sense of the poster? Clearly, Lillie has teamed up with a Cosmog, whether it be the one from Sun or Moon or not. And I would agree with Polygon that the fact that Lillie’s holding a Pokéball would imply that she’s a trainer now. So what’s going on? Will Ultra Sun and Ultra Moon be sequels to Sun and Moon, in which Lillie will return from Kanto having become a Pokémon Trainer and, somehow, teamed up with yet another Cosmog? There’s a couple of problems with this theory. For one thing, it seems way too convenient and contrived that Lillie would just happen to run into yet another Cosmog. Also, the appearances of the returning characters (Lillie, Hau, Gladion) are the same as they were by the end of Sun and Moon. The last time there were sequels in the mainline Pokémon games, they were Black 2 and White 2, which showed the passage of time through giving returning characters different looks and roles in the games from the first Black and White. With the characters on the poster looking as similar as they do in Sun and Moon, it would seem that very little time has passed since Sun and Moon. If this is the case, then Ultra Sun and Ultra Moon would have to deal with the plot hole of what happened to the playable character from Sun and Moon. In Black 2 and White 2, the playable character from Black and White is mentioned, but it is implied that they are gone, having kind of just disappeared one day. While not the most fulfilling of explanations, it works well enough in Black 2 and White 2 because a few years have passed since the playable character of Black and White became the strongest Trainer in the region, so it’s probably not too much of a stretch to think that after a while they left to train in another region or some secluded area with super strong Pokémon. But if Ultra Sun and Ultra Moon take place almost immediately after Sun and Moon, then there’s not much of an excuse to leave out the playable character from those games who just recently became the Alola region’s first champion.

Another possibility is that Ultra Sun and Ultra Moon aren’t sequels to Sun and Moon, but rather re-tellings of them, like Yellow was to Red and Blue, or Crystal to Gold and Silver, etc. Maybe in this new version of the story, Lillie reaches her “Z-power form” earlier and decides to become a Trainer before leaving for Kanto at the end of the game, which would explain her appearance on the poster. This would also explain why there’s a Cosmog next to her in the poster; since that was such an important plot point in Sun and Moon, it’s likely to be kept in a re-imagined version of the story. This explanation also explains why Hau and Gladion look the same as they did in Sun and Moon.

Sun and Moon also toyed with the idea of alternate dimensions, implying that the worlds inside Sun and Moon games exist in alternate realities. So who knows? Maybe Ultra Sun and Ultra Moon are going to get all Rick and Morty and have Hau and Gladion from the Sun or Moon universe meet up with a Lillie from a universe where she achieved her “Z-power form” earlier and then all get together in a universe where the playable character is replaced with these new playable characters. As hilarious, interesting and intellectually chaotic as this would be, I don’t find this explanation particularly realistic. It seems to me that the re-tellings explanation is probably the right one. But we’ll see on November 17 when Pokémon Ultra Sun and Ultra Moon release.