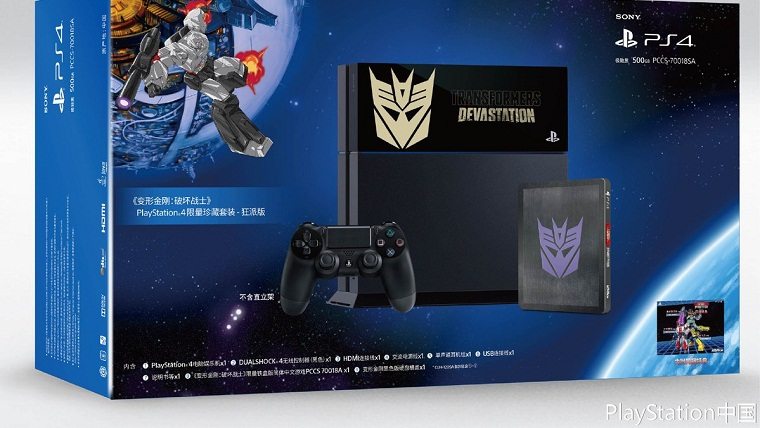 China is set to have a new PS4 bundle unavailable anywhere else because it includes a copy of Transformers Devastation.

As posted on NeoGAF, Sony will be releasing this special PS4 bundle exclusively in China on March 3rd, 2016. The best part of this bundle is that there are two versions to choose from.

Pictured above is the Decepticons version of the bundle. However, buyers can also get the Autobots version as well which is colored white. The steelbook copy of Transformers Devastation is also sporting the respective logos from each factions.

This version will be localized in “Simplified Chinese”. It is said to be the second ever Activision game to be fully localized in Chinese with the first being Call of Duty: Black Ops 3.

China is getting special treatment with Transformers Devastation because the franchise is super popular over there. Thanks to Michael Bay’s Transformers: Age of Extinction, that movie popularized the robots in mainland China. The movie actually made more money at the Box Office in China than in North America.

There’s no word if these special PS4 bundles will be released outside of China. It’s likely they’ll stay exclusive to China since Transformers Devastation has already come and gone in most other countries.