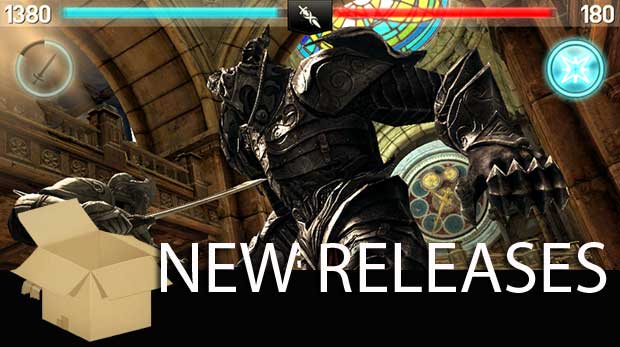 Here are your video game releases for the week of November 28th, 2011

Infinity Blade II – (iOS) – From Epic Games and ChAIR Entertainment comes Infinity Blade II, the sequel to the critically acclaimed, best-selling iOS game Infinity Blade. Infinity Blade II continues to raise the bar for triple-A mobile gaming. Journey into the world of the Deathless tyrants and their legion of Titans. Build skills and upgrade characters… all while delving deeper into this mysterious, timeless adventure.

National Geographic Challenge! – (Xbox 360, PlayStation 3, Wii) – National Geographic Challenge! is a very entertaining game suitable for the whole family, but also ideal for a group of friends who want to have some fun and challenge themselves with pressing questions which will lead the players to a fantastic adventure of discovery of the world. The objective of each challenge will be to conquer the greatest number of territories possible, defeating your opponents by delivering the correct answers in order to progress towards world domination!

Puddle – (XBLA, PSN) – Puddle is a physics-based mixture of puzzle and platform elements, with the player steering a puddle of liquid to an exit point by manipulating the game environment. The user tips the levels to move the liquid, and must gauge the friction, momentum and properties of the different liquids in order to bypass hazards such as electrical sparks, fire, rifts, and obstacles.

Sly Cooper and the Thievius Raccoonus – (PSN) – Only one thing can make a thieving raccoon better at his job, and that’s the long-lost Thievious Racoonus, a collected work of thieving knowledge. Split into ten pieces, the writings are spread across the world, and it’s up to one young raccoon, Sly Cooper, to track them all down. Angered security guards, searchlights, and lasers are just a few of the obstacles Sly will have to confront, but luckily he’s got binoculars, swords, daggers, and all sorts of other fun stuff.

Sly 2: Band of Thieves – (PSN) – The sequel to Sly Cooper delivers the same crime detective style of presentation, borrowing heavily from movies, novels and comic books to create a beautiful, highly animated game. The story takes place two years after Sly Cooper and the Thievius Raccoonus. In the first game, Sly was becoming a professional thief, but in Band of Thieves, he is a professional thief — so he retains all of the moves from the first game.

Sly 3: Honor Among Thieves – (PSN) – The third edition of the innovative platformer series from Sucker Punch and SCE America. This time around, the cast of playable characters has been expanded even further to include Carmelita, a shaman from Australia who speaks in tongues, Dimitri, and some other characters that have yet to be revealed. Once again, the setup for each mission is with a series of events that need to be done within each large environment.

Voltron: Defender of the Universe – (XBLA, PSN) – Voltron is returning to defend the universe in this video game based on the revival of the classic 1980s anime series. Voltron: Defender of the Universe combines classic Voltron animation and style with high definition graphics and audio that deliver high-impact, real-time single and multi-player gameplay with up to five players. Relive the most defining moments from the classic series, including the discovery of the Lions and the very first time the Space Explorers form Voltron.

Nano Assault – (3DS) – Stop the deadly Nanostray virus from spreading and contaminating civilization in Nano Assault, a fast-paced action shooter set within a visually stunning cellular system that leaps off the screen in full 3D. Control your microscopic Nanite ship inside the dangerous virus to fight off infections, navigate through alien cell clusters, battle bosses, and ultimately analyze and destroy the virus’ core to save humanity.

Jungle School – (DS) – You’re the new teacher in the wildest class in school! Can you turn these underachieving kids into A+ students?

DaGeDar – (DS) – GameMill Entertainment brings the exciting world of DaGeDar to the gaming market via the Nintendo DS in time for the 2011 holiday season. Each DaGeDar holds a unique “spirit within” that offers advantage to the player during each race. Using sharp reflexes players do battle in a game of speed and skill as they race their DaGeDar ball to the end of a virtual raceway.