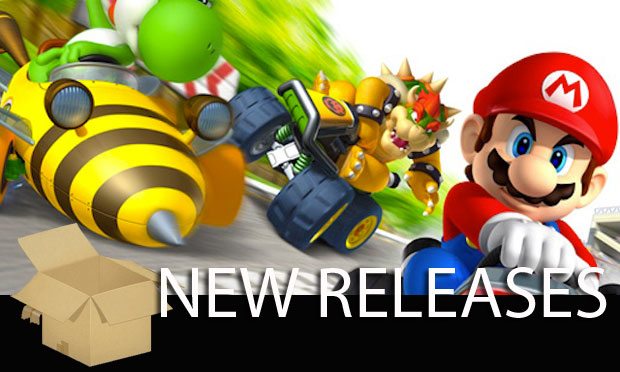 Here are your video game releases for the week of December 4th, 2011.

Mario Kart 7 – (3DS) – The newest installment of the fan-favorite Mario Kart franchise brings Mushroom Kingdom racing fun into glorious 3D. For the first time, drivers explore new competitive kart possibilities, such as soaring through the skies or plunging to the depths of the sea. New courses, strategic new abilities and customizable karts bring the racing excitement to new heights.

Battlefield 3: Back to Karkand – (PS3) – Battlefield 3 leaps ahead of the competition with the power of Frostbite 2, the next installment of game developer Dice’s cutting-edge game engine. This state-of-the-art technology is the foundation on which Battlefield 3 is built, delivering superior visual quality, a grand sense of scale, massive destruction, dynamic audio and incredibly lifelike character animations. As bullets whiz by, walls crumble, and explosions throw you to the ground – the battlefield feels more alive and interactive than ever before.

Xotic – (Xbox 360) – Get ready for an independent game that doesn’t look or play like a traditional first-person shooter (FPS). Published by Valcon Games, and developed by WXP Games, Xotic is launching on Xbox LIVE® Arcade for the Xbox 360® video game and entertainment system from Microsoft.

Just Dance 3 – (PS3) – Just Dance 3 kick-starts the party with over 45 tracks from multiple genres and popular artists including today’s hottest hits like “Party Rock Anthem” by LMFAO, “California Gurls” by Katy Perry featuring Snoop Dogg, and “Forget You” by Cee Lo Green. Also included are legendary favorites like “I Was Made For Lovin’ You” by Kiss.

The Adventures of Tintin – (Xbox 360, PS3, 3DS, PC, Wii) – The Adventures Of Tintin: The Game is an Action-Adventure game based on the major motion picture, The Adventures of Tintin: Secret of the Unicorn, by Steven Spielberg and Peter Jackson, and the classic 20th century Belgian comic that inspired it. The game is a unique blend of classic action-adventure platforming, flight, swordplay, rail shooter and puzzle-solving gameplay. Features include: 2-player co-op, optional Kinect Sensor for Xbox 360 support, the ability to play as several characters including Tintin’s dog Snowy, focused skill challenges against AI and more.

The Oregon Trail – (Wii,3DS) – A thrilling trailblazing adventurethat builds real-life skills!Product InformationBuild Problem-Solving & Decision-Making Skills!Build real-life decision-making and problem-solving skills as the leader of a wagon party. Choose your team and supplies read maps plan your route and guide your team through the unknown wilderness. Tough choices lie ahead but with the help of your wagon party and people you meet along the way you’ll conquer this challenging journey and arrive in a new land.

CrimeCraft: Gang Wars – (PC) – GangWars also delivers significant changes geared towards new players including an updated, optional prologue campaign and lobby-based guidance to help new users find their way around Sunrise City. These features are all designed to get new players into the action faster than ever before.

Fortune Street – (Wii) – Players become familiar characters from the Nintendo and DRAGON QUEST universes in a board game that challenges them to play the real estate and stock markets wisely to win. Players race around the board trying to accumulate wealth and hit a target value while buying, selling and trading property with friends and family to see who can be the first to cash out.

Final Fantasy VI – (PSN) – Ages ago, evil beings created powerful creatures called Espers and unleashed them against each other. The resulting battles turned their world into smoldering rubble. Legend has it that the Espers destroyed themselves and most of humanity. Magic disappeared forever.

Forza Motorsport 4: December IGN Pack – (Xbox 360) – The second expansion to the popular racer for the Xbox 360.

7 Wonders: Treasures of Seven – (DS) – 7 Wonders is back, with an all-new rotatable board that will have puzzle game players everywhere matching runes for hours! In this brand new installment of the hit franchise, 7 Wonders presents six-sided cubes that make up each level. Players must break blocks to create pathways that can be used to connect lock and key by rotating the board and breaking blocks to follow the path. Once you’ve conquered all six-sides, move to the inner cube where you’ll attain pieces to build your compass. Build all nine amazing wonders, and you’ll uncover the hidden city with the help of your map and compass. Don’t miss this incredible and innovative chapter in 7 Wonders!

Defense Grid: Your Monster – (Xbox 360, PC) – In this first full-story expansion to the award-winning Defense Grid, GLaDOS, the menacing AI from Valve’s awesome Portal franchise, guest stars and shakes up the Defense Grid world. Players will battle not only alien hordes, but the deviousness of GLaDOS as she tests the player’s skills and changes all of the rules that you have come to know.