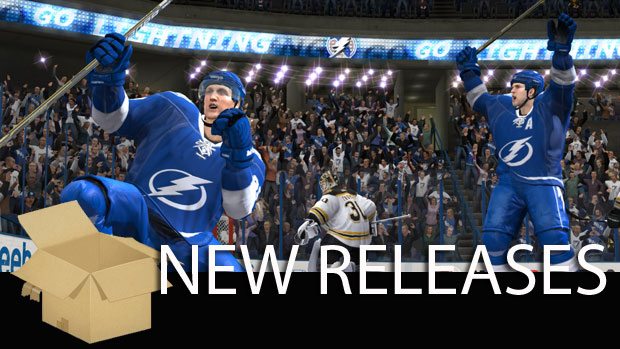 The latest video game releases for the week of September 12th, 2011.

The Gunstringer – (Xbox 360) – The Gunstringer marries Twisted Pixel’s beloved storytelling, characters, and polish with fresh gameplay mechanics. Players can puppeteer a character through a variety of 3D and 2D gameplay styles, controlling every jump and dodge with one hand, while filling enemies with lead using the other. The Gunstringer provides players with new Kinect shooter experiences that have never been seen before.

NHL 12 – (PS3, Xbox 360) –  EA Sports’ annual hockey video game that puts players on the ice with the ultimate goal to become the next great superstar of the hockey world as you lead your team to a Stanley Cup championship. Features include a new full contact physics engine, Anticipation AI, the ability to take control of a team in ‘Be a GM’ mode, a comprehensive career mode, all-new dynamic goalie interaction that includes the ability of goalies to fight, the NHL’s Winter Classic game, multiplayer support and more.

God of War Origins Collection – (PS3) – The bundling of two previously released PlayStation Portable games in the God of War single player, third-person action series that make their first appearance on PlayStation 3. Games included are God of War: Chains of Olympus and God of War: Ghost of Sparta which respectively are a prequel to the original PlayStation 2 God of War release, and an interquel between the events of God of War and God of War II. Downloadable content is included and both games feature HD resolution and stereoscopic 3D game support.

Hard Reset – (PC) – Hard Reset is a PC-exclusive FPS from The Flying Wild Hog, a Polish developer that is made up from members of the team behind Painkiller (People Can Fly), and former developers from CD Projekt Red and City Interactive.  In development since April 2009, the game will feature a cyberpunk plot.

Bit.Trip Complete – (Wii) – A compilation of all 6 award-winning BIT.TRIPgames: BEAT, CORE, VOID, RUNNER, FATE, and FLUX!This COMPLETE version includes a video gallery with more than 25 clipstelling the story of CommanderVideo, an image gallery with concept art,and an audio gallery featuring fan remixes, original songs, and demos ofBIT.TRIP songs. All copies are packaged with a limited edition BIT.TRIPSoundtrack Sampler. Only in COMPLETE will you be able to read six letters to BIT.TRIP fans,written by the series’ director.

Bit.Trip Saga – (3DS) – A compilation of the six games of the BIT.TRIP series originally developed as WiiWare and for play on various mobile platforms. A unique blend of classic 8-bit Arcade style graphics, and modern gaming elements, BIT.TRIP SAGA 3DS allows for a complete experience of this popular series acclaimed for its merging of the best of classic and modern gaming. Compilation features include: addictive Rhythm-based gameplay, chiptune-inspired soundtracks, a variety of gameplay mechanics, in-game guests and more.

Thor: God of Thunder – (3DS) – Brace yourself for a mighty storm — the legendary pages of the classic Thor comics are coming to life, and it’s going to be a sky-rumbling, earth-shaking ride. The storied hammer, Mjolnir, is yours to wield as you become the God of Thunder in this epic new adventure. The power to shift the storm is in your hands and it is up to you to decide how to use it and whom to use it against. Enter a sprawling mythological world ruled by the elemental forces of fire and ice. Face unimaginable creatures, including frost giants, trolls and other unthinkable monsters. Become the legend. Become Thor.

Red Orchestra 2: Heroes of Stalingrad – (PC) – Focusing on the Battle of Stalingrad and the surrounding operations, both German and Russian, from July 1942 to February 1943 the game allows the player to experience one of the most brutal battles in all of human history.