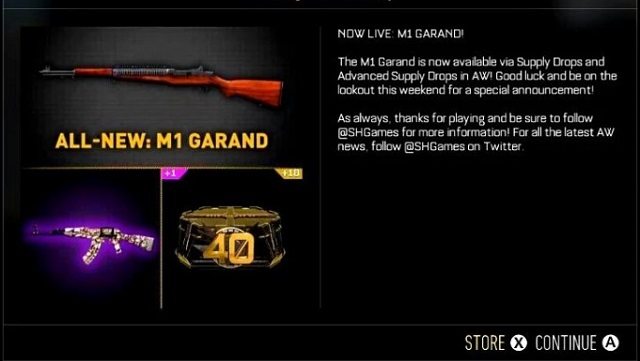 Sledgehammer Games has revealed that a new weapon will be available in Call of Duty: Advanced Warfare when players open up supply drops. Reportedly, the new weapon is available now on Xbox One and is coming soon to the PS4 and PC versions of the game.

CharlieIntel spotted that the new weapon was available by reading the “Message of the Day” when booting up Call of Duty: Advanced Warfare. Sadly, it looks like the weapon will not be appearing in the PS3 and Xbox 360 versions of the game.

The message says: “The M1 Garand is now available via Supply Drops and Advanced Supply Drops in AW! Good luck and be on the lookout this weekend for a special announcement! As always, thanks for playing and be sure to follow @SHGames for more information! For all the latest AW news, follow @SHGames on Twitter.”

With lots of players migrating over to Call of Duty: Black Ops 3, it’s nice to know that Sledgehammer Games is still updating Advanced Warfare. It will be interesting to see what this special announcement is about when it’s revealed this weekend. We’ll be sure to let you know what it is this weekend.