NFL Football on Xbox One could be big this year

The latest news in the world of video games at Attack of the Fanboy
August 3rd, 2014 by AOTF Staff 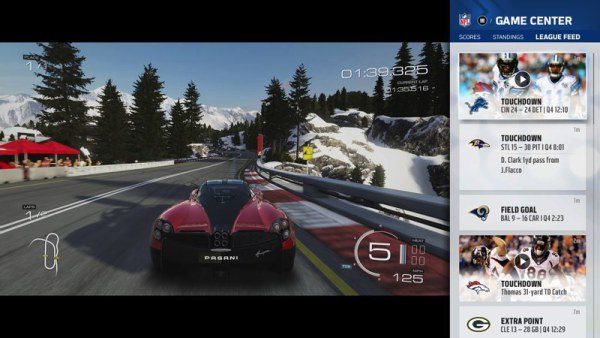 When Microsoft revealed the Xbox One, there was a strong partnership that the company had formed with the NFL it had appeared. While last year, there were some synergistic features between the Xbox One and NFL, this year it’s sounding like an initiative set to blossom.

A new version of the NFL App on Xbox One is due out later this month, and will feature personalized highlights and analysis of the all things NFL. That means users will be able to track their favorite teams from the console, as well as keep track of fantasy statistics. A premium version of the application will allow users to stream classic NFL games and other original programming straight to the console.

A slew of NFL features, from fantasy tracking to streaming and more, have been added to the Xbox One

For the devout NFL fans who want to see all the action, combining subscriptions to the NFL Network and NFL Redzone will allow you to stream that content through the Xbox One. Furthermore, DirecTV Sunday Ticket subscribers will also have full access through the Xbox One as well.

An online Sunday Ticket subscription grants access to the Red Zone Channel, a Fantasy Zone channel, and highlights and updates when players you are tracking are close to scoring. This fantasy integration seems to be one of the big features that have been bolstered for 2014. Fantasy Football tracking on the Xbox One allows for snap updates on the Xbox One dashboard, showing scoring plays in both text and video formats.

Another big deal on the fantasy front is that the Xbox One will be able to integrate with online leagues, outside of the ones found on NFL.com. That means Fantasy Footballers who play on Yahoo or CBS, and others will be able to track their leagues on the console.

These features sound like Microsoft and the NFL are looking to make the most of their multi-year partnership. While last year didn’t quite hit the mark, the TV pass through integration and snap features of the Xbox One, coupled with new apps and streaming features from DirecTV, could make the definitive NFL veiwing experience only possible on Microsoft’s console.