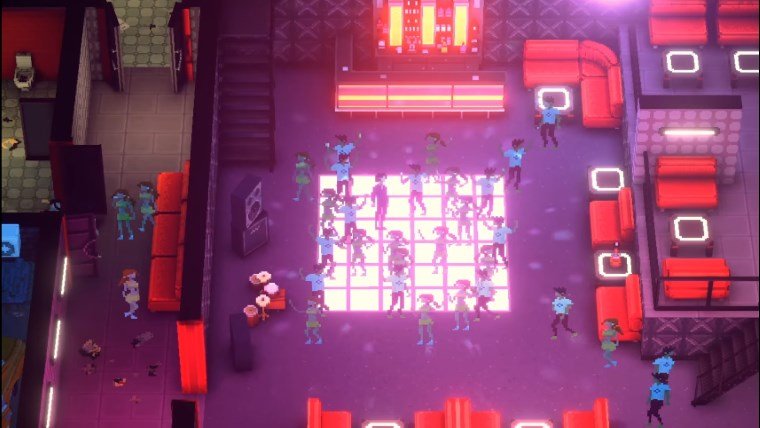 Indie publisher tinyBuild Games has announced a brand new sequel to their hit stealth game Party Hard with Party Hard 2 scheduled for release this Summer. In case you haven’t played the first one, or seen the many Let’s Play videos and Twitch streams, Party Hard has players stealthily murdering loud partygoers by any means necessary. The sequel looks to retain the old school styling, while making some critical updates to the experience.

“You don’t get your Christmas Bonus, so the only logical thing is to stab (and blow up) everyone at a corporate party,” reads the official announcement from tinyBuild. Party Hard 2 looks like a definite visual improvement over the strictly 2D affair of the first game. tinyBuild promises a brand new engine “using stylized 3D environments with physics and real-time shading. It creates a very unique visual style that allows for plenty new gameplay opportunities.” The characters are still rendered in 2D though, creating an interesting visual style that’s all its own.

While Party Hard didn’t have much of a cohesive story, the developer is still creating a sort of understandable universe here. Party Hard 2 stars a totally new protagonist and takes place ten years after the first game. “We’re playing as a brand new protagonist who only wanted to get his Christmas bonus. Alas, he didn’t, and the only logical thing is to start a stabbing spree at a corporate party.”

The original Party Hard, like many games produced by tinyBuild, had a very open development process, with fan feedback playing a large role in development. Expect that again with Party Hard 2, with multiple development builds planned for the future.

You can check out the official announcement trailer below, which was first shared by tinyBuild on Twitter. You can also sign up for the Party Hard 2 Alpha right here.