Persona 5 Gets Valentine’s Day 2017 Release Date In The US, Premium Edition Announced

The latest news in the world of video games at Attack of the Fanboy
June 7th, 2016 by Dean James 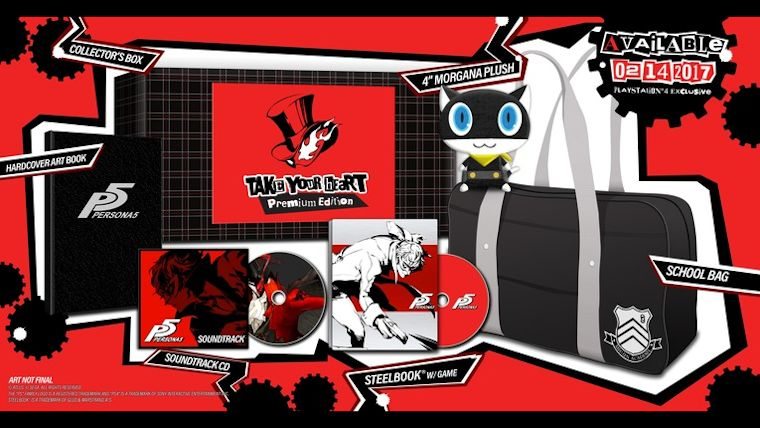 The Persona series was once a niche JRPG series, but following games like Persona 3 and Persona 4, it has only grown in popularity everywhere. We learned recently that the much anticipated Persona 5 would be coming to Japan in September, but it has now been revealed that the game won’t be arriving in the US until 2017.

Atlus sent out a press release this morning that revealed details of the Western release of Persona 5, which included not just the release date but also the special editions.

According to the press release, Persona 5 will be arriving in the US on February 14, 2017 for both PS4 and PS3, which means it will be released on Valentine’s Day. This is actually quite fitting considering the series offers relationships aspects in the gameplay.

Atlus also announced that there will be a special day one Steelbook Launch Edition that will retail for $59.99, though these will be in limited quantities. In addition, there will also be a “Take Your Heart” Premium Edition of Persona 5 that will retail for $89.99, that will include a soundtrack CD, Morgana plush, a 64 page hardcover book, a steelbook, a school bag, and a collectible outer box. These two special editions are exclusive to the PS4 version though, so PS3 owners will just have the option of the game itself.

This decision to wait until 2017 is probably a wise one for Atlus in the US, as releasing it in the fall would be putting it directly against Final Fantasy XV. This might not be as big of a problem in Japan, but it is definitely smart to give a little distance between two of the biggest upcoming RPGs in the US.