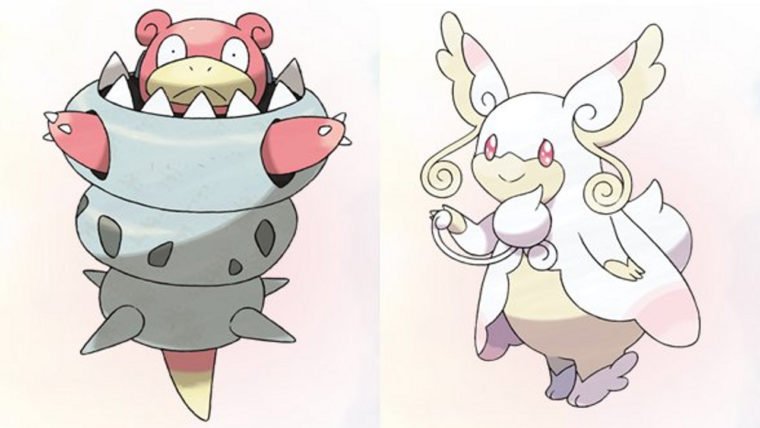 According to Pokemon fan-site Serebii the official Korean Pokemon website accidentally uploaded pictures and details for two new Mega Evolutions before quickly removing them. Luckily a few fans grabbed the screenshots and info before it was erased, so take a look at what has been revealed below.

When the battle begins Mega Slowbro uses its tail to stand up straight and it propels itself like a spring.

The two new Mega Evolutions are Mega Slowbro and Mega Audino. Mega Slowbro will have a special ability called Shell Armor, which will likely boost his defense stat quite a bit. Slowbro will already have some pretty hefty Defense and Special Defense stats in his Mega Evolved form, so he should be a very formidable opponent. The story of his Mega Evolution says “Energy was focused in the Shellder biting Slowbro’s tail, and the result was that the hardness of the shell increased and it became an immensely hard suit of armor that can be damaged by no one. When the battle begins Mega Slowbro uses its tail to stand up straight and it propels itself like a spring.”

Mega Audino will be a Normal/Fairy type Pokemon and will have the ability “Healer”. Audino will also have boosted Defense and Special Defense stats like Slowbro. The leak also revealed that “whoever comes into contact with its hand falls into a deep slumber.”

With these two added to the roster we currently know of ten new Mega Evolved Pokemon being added for Pokemon Omega Ruby and Pokemon Alpha Sapphire. That is on top of the 30 Mega Evolutions that were originally available in Pokemon X and Pokemon Y. There are still a lot to choose from though, so we could see even more added as the game gets closer to release.

Pokemon Omega Ruby and Pokemon Alpha Sapphire will be available on November 21st exclusively for Nintendo 3DS and 2DS.