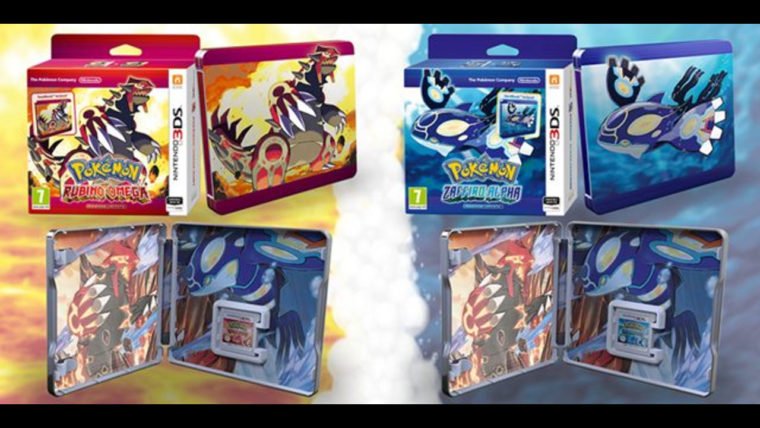 A report from Nintendo Enthusiast has revealed the Special Editions that will be available in Europe for Pokemon Omega Ruby and Pokemon Alpha Sapphire. The limited editions will only be available at launch and will come in exclusive steelbook metallic cases for the games. Aside from the case there doesn’t seem to be anything else included in the Special Edition of Pokemon Omega Ruby & Alpha Sapphire.

However, there will be some pre-order exclusives offered for those who buy the game early. Pre-orders placed through the Official Nintendo UK Store or through GAME will get a limited edition Primal Groudon or Primal Kyogre figurine. Likewise, pre-orders through Shopto.net will get a Torchic keychain. It is nice to see Nintendo forgoing the practice of offering up in-game content with pre-orders and special editions. With a game like Pokemon, which centers around catching all the Pokemon you can, it would be annoying to have even more rare and exotic creatures.

Whether any of this will cross over to the US is still not known, but it seems like Nintendo has been reserving Special Editions for the European and Japanese markets lately. Hyrule Warriors featured a couple of really awesome Special Editions that were exclusive to Japan. Before that was Mario Kart 8 which offered a Special Edition in Europe that included a collectible Blue Shell. This last one was offered in the US, but only at the Nintendo World Store in New York.

Pokemon Omega Ruby and Pokemon Alpha Sapphire will be released on November 21st in the US exclusively for Nintendo 2DS and 3DS. If these Special Editions don’t make it to the US, at least we can take solace in the fact that we get the game a week early. While you wait be sure to check out the amazing music video featuring Slowpoke. The only thing crazier than the video is the fact that it was officially released by Nintendo.