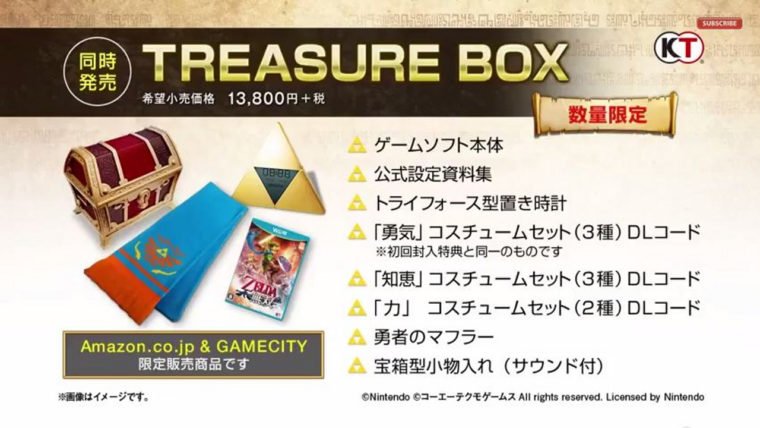 Japan is no stranger to amazing special edition releases of games and consoles. Previously we showed you Kingdom Hearts special Japanese release, as well as a few exclusive Playstation 4 systems. The latest one might be the most heartbreaking for US fans to miss though. Hyrule Warriors will be getting two separate special editions, dubbed the Premium Box and Treasure Box releases.

Both versions will contain the game (region-locked for Japan), an official book, a Triforce table clock, and the pre-order bonus costume set with three special costumes. The Treasure Box version includes all of this and the Force costume set with an additional two costumes, Link’s scarf, and a Zelda-styled treasure box with sound from the game. Check out the video below to see all of these rewards in action.

If you don’t live in Japan and wish to have all of this Zelda goodness, then be prepared to shell out some extra cash. The sets cost 9,464 yen and 14,904 yen on Amazon Japan, which converts to $92.97 and $146.36 respectively. Unfortunately Amazon Japan won’t ship these items to the US, so you’ll need to look elsewhere. Note though that the actual game will not work in a Wii U purchased outside of Japan. If you are buying this set you do so for the collectibles, and not the game.

Three options are Play-Asia, CD Japan, and Nin-Nin-Game. All three of these stores offer the Hyrule Warriors, or Zelda Musou as it is called in Japan, special editions and will import them into the US. Play-Asia is offering the smaller Premium Box for $139.99, and the Zelda Musou Treasure Box edition for $239.99. Nin-Nin-Game has them for $105.43 and $166.88. CD Japan has very slightly higher pricing, but seemed to offer better shipping rates near me with the Hyrule Warriors Premium Box costing $106.12 and the Treasure Box coming in at $175.63. Shipping and taxes will vary depending on your area so be sure to check all three.

Hyrule Warriors will release exclusively for Wii U on August 14th in Japan, September 19th for Europe, September 20th in Australia, and September 26th in North America.