Prey 2: If its Not on Your Radar, it Should Be 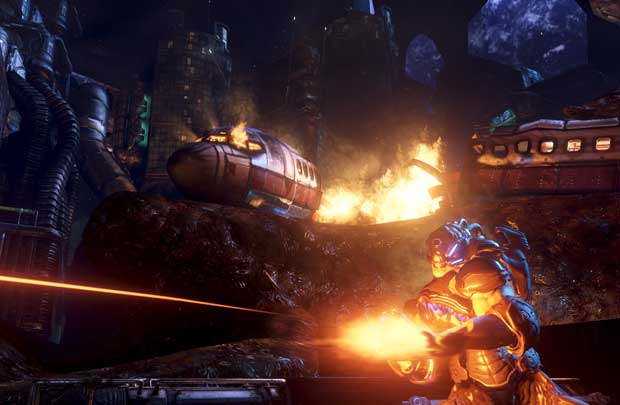 One of the best looking games of E3 2011 was Prey 2.  I know, it was almost as shocking to our system ocurring in real time as it is restating these facts a week later.  Getting the chance to see some of Bethesda’s upcoming work, we were surrounded by some pretty great games at their E3 booth.  With Rage on display, and Elder Scrolls V also in attendance, I wasn’t neccesarily thrilled that I had committed to waste an extra 30 minutes of time watching a demo reel of a game that I had little to no interest in.

Honestly, I was left unimpressed with the original Prey game.  It frankly wasn’t as good as the competition at the time, and it was one of those games that I played little of.  One that didn’t do a well enough job of pulling me into the world and one that was returned to the store before seeing the final credits roll.  Even when Prey 2 was officially announced, I immediately remembered how much I didn’t like the original game, and can remember reading the announcement and thinking, why?

That question was answered within the opening moments of the demo reel for the upcoming shooter.  Prey 2 looks so much different than the first game, both in graphics, and gameplay, so much so that any preconcieved notions were thrown out the window within seconds.  I couldn’t believe it was the sequel to Prey actually.   The hands off showing of the game, showed off just the tip of iceberg, but it was more than enough to spark my interest.

In Prey 2 you’ll be playing as US Air Marshall Killian Samuels, and you’ll begin the game with your pistol and an aquired taste for alien blood.  Though much wasn’t revealed about the plot behind the game, at some point the game shifts between this stranger in a new land storyline to one where you are veteran vigilante bounty hunter.  It’s  this bounty hunting system that is the main focus of Prey 2.

Being that Prey 2 is an open world game, it looked like it played out very similar to other sandbox style titles which could be attacked in any number of manners.  You could implicitly continue to collect bounties to level your character, or you could attack portions of the game that would progress the main narrative.  No matter what you choose, you’ll also be dealing with the moral decisions that one in the position of being a bounty hunter would face.  You can go off on a rampage, killing whoever you’d like, but you’ll face consequences.  One of them is the security which governs the alien city, who’ll let you know when you’re breaking the law.  The premise sounded great, and looked great in action.  It’s an interesting premise, and one that definitely holds alot of promise.  Though it wasn’t the only trick that Human Head had up their sleeve.

Aside from the stunning graphics of the game which the developer described as “Alien Noir” ,which furnished a beautiful yet seedy alien world,  the game  showed off a free running feature.  Not all aliens come quietly just because you ask them to.  Some make a run for it, and you’ll be using everything in your environment to get the jump on them.  The instances that we were shown will let you take unique paths to head off your targets.  There seems to be a variety of different methods of catching these bounties, while only a handful were shown in the demo.  The free running looked extremely solid, and the trial and error nature of the chase scenes looked to offer plenty of variety. What looked most impressive was the incorporation of all of these different attributes, in what appears to be a very ambitious title.  If they can pull off everything as well as it was described in the demo into a cohesive experience, Prey 2 is shaping up to be one of the best games of 2012, likely because the game didn’t look or play at all like its predecessor.  The demo was full of new ideas, and looked like it had exactly the kind of innovation that we as gamers are always going on about.