The latest news in the world of video games at Attack of the Fanboy
July 31st, 2015 by Damian Seeto 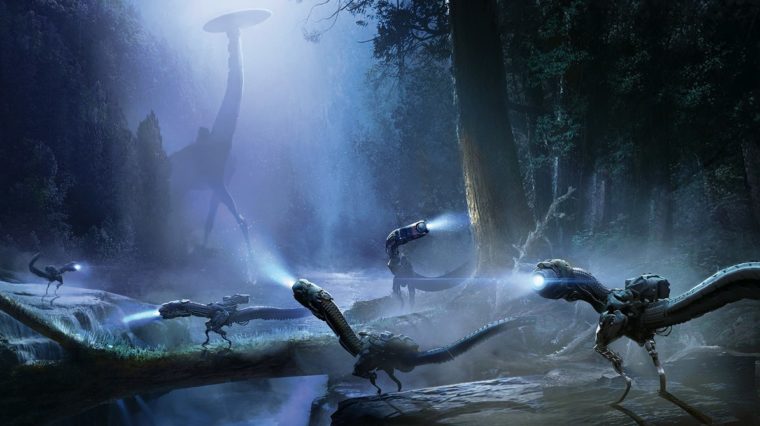 Some new concept art has now been revealed for Horizon: Zero Dawn that takes a look at a two different dinosaur types.

The concept art comes courtesy of Edge Online. The game is on their cover for September 2015. The cover shows more of the Tyrannosaurus Rex style robot we saw at E3 2015.

As for the new concept art shown for Horizon: Zero Dawn, we actually have a look at two different robotic dinosaurs. In the foreground are small looking “Compy” looking dinosaurs. They have spotlights for eyes and appear to be hunting in packs.

It’s possible these small dinosaurs could be an annoyance to kill. If they act like the Compy dinosaurs from the Jurassic Park games, they will be very annoying as they like to ambush you.

In the background we take a look at a very tall looking robotic dinosaur. It’s tall like a Brontosaurus or a Brachiosaurus. However other than the height, it looks very different as it has a disc for a head for some reason. It’s like a UFO landed on its face and replaced the real head.

Anyway, it’s great to see how creative Guerilla Games have been with the design of Horizon: Zero Dawn. Hopefully we will see even more epic gameplay from this PS4 exclusive later this year.