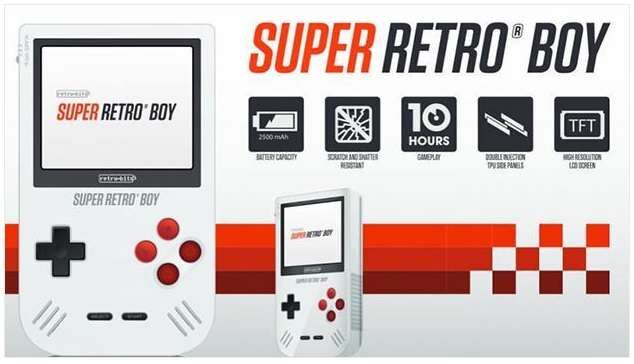 Retro-Bit has unveiled yet another retro-style console, Super Retro Boy at CES 2017, taking home the BEST New Tech Award presented by Destructoid.  Designed after one of Nintendo’s best-selling handhelds, Gameboy, the newly vamped Super Retro Boy is capable of playing Game Boy, Game Boy Color, and Game Boy Advance games.  With the D-pad placed on the opposite side the AB smash buttons, retro fans can’t help but notice the similarities between the original console.  Standard black and white colors were showcased at the event.  There has not been any word yet on the availability of different color variations.  So to all the 80s/90s kids out there, if you still happen to have your old cartridges laying around, it’s time to dust them off and pop them into this new bad boy.

The compact system is neatly packaged with 10-hour battery life (by microUSB charge) and features a TFT high resolution screen, allowing for a pleasant gaming experience.  Expected to release this August, gamers yearning for nostalgic gameplay can purchase the Super Retro Boy for a retail price of $79.99.

Upon it’s original release back in 1989, Nintendo’s Gameboy a 8-bit portable video game mechanism, became one of the top selling devices during the retro era.  Competing with Sega’s Game Gear and Atari’s Lynx at the time, portability was a crucial aspect in boosting sales enabling players to not only enjoy games on their analog televisions, but also take them on the go and share their experience with family and friends.  Its great success led to multiple versions of the console, with the Game Boy Color following shortly after introducing games in full color which became another huge hit, and Game Boy Advance taking portable gaming to the next level.  Some popular franchises even to this day debuted on the early consoles like Super Mario, Pokemon, Fire Emblem to name a few.

Will you be picking up a Super Retro Boy at release? Let us know in the comment section!