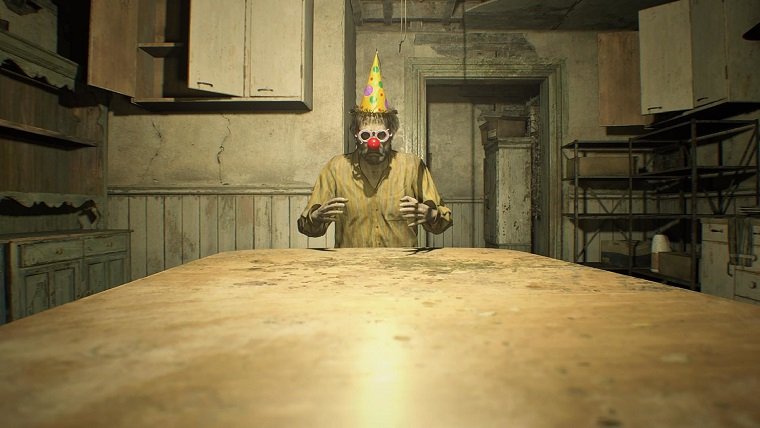 Those who weren’t playing Resident Evil 7 on PlayStation 4 had to wait longer to play the game’s current DLC, as both the Banned Footage Vol. 1 and 2 were timed PlayStation 4 exclusives. However, that timed exclusivity period has come to an end, and both can now be purchased on Xbox One and PC.

Bedroom – Clancy must figure out how to get out of a locked bedroom in the Baker family’s plantation and make his escape but beware – Marguerite Baker won’t be happy if she knows he’s up and out of bed!

Extra Mode – An infinitely replayable extra game mode called “Ethan Must Die,” which is an extra tough mode that is separate from the events of RE7. (Please note that PSVR is not supported in “Ethan Must Die.”)

21 – Players will need to gamble with their own life in a deadly game of “21” with Lucas Baker.

Extra Mode: An extra gameplay mode titled “Jack’s 55th Birthday” provides a race against the clock as players serve up the Daddy of the family, Jack Baker, with tons of treats for his special celebration. (Please note that PSVR is not supported in “Jack’s 55th Birthday.”)

While the game already has a substantial amount of DLC available considering the game only launched last month, there’s actually more in the works that will be coming later this year. This will include a free DLC called Not a Hero that stars a different protagonist, though we’re still waiting on the official details for it.