Retro Racing on OUYA Down to $2.50 Until Easter

The latest news in the world of video games at Attack of the Fanboy
April 19th, 2014 by William Schwartz 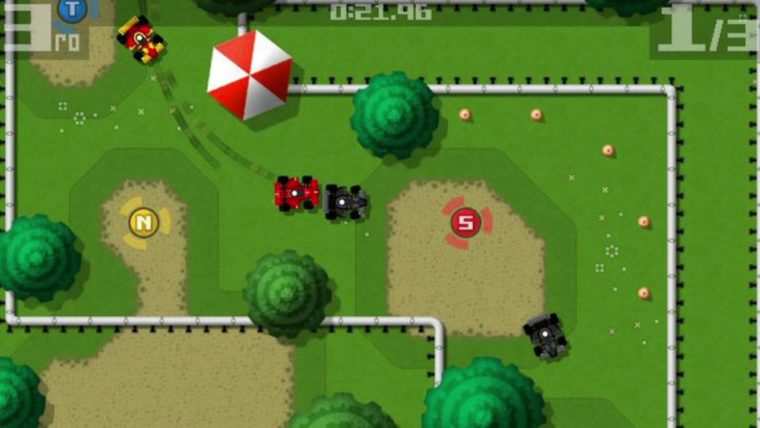 Sony’s Easter flash sale is definitely going to garner a lot of attention, but the OUYA’s had its own little sale going on. The ten days of deals continue with Retro Racing. This overhead racing brings back memories of titles like Rally X and Super Sprint and features real-time power-ups that boost your acceleration and can give you a quick boost. The real-time nature of the power-ups means that you have to be smart with going after them. While you’re generally safe going for something that helps your tires and improves acceleration, going for a nitro just because it’s there can be dangerous.

It’s easy to grab a  nitro boost and wind up flying all over the track – giving rivals a big lead. Fortunately, if you make that mistake early on, you’ll be able to rebound. Retro Racing’s graphics evoke the early ’90s fairly well. RR benefits from smooth controls and has a shockingly good rock-heavy soundtrack, and is worth at least trying if you’ve got an OUYA. The free portion of the game lets you play through two tracks. It’s a little bit limited compared to most free portions, but still lets you play enough to give you an idea if the game is worth spending $2.50 for until the sale price ends at 12 PM EST on April 20. If you wind up enjoying it, then $2.50 isn’t a bad price, and is certainly far better than the regular price of $5.