Rumor: Tom Clancy’s The Division Open Beta To Be Held Later This Month 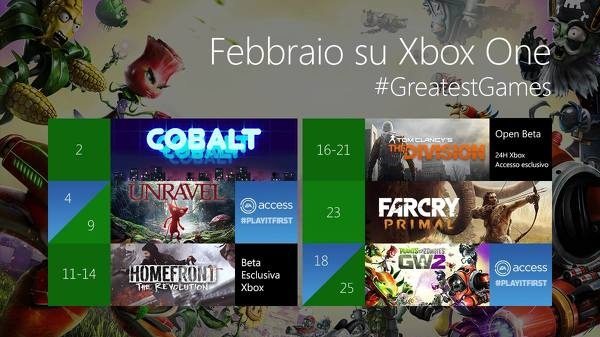 The closed beta for Tom Clancy’s The Division has just ended, but there is a chance that an open beta is being scheduled for later this month for more gamers.

The Italian Xbox Facebook page posted the picture that you can see above. It shows the upcoming games that will be playable in February for the Xbox One. This includes demos, betas and actual game releases.

On the top right hand corner, you can clearly see that there appears to be an open beta planned for Tom Clancy’s The Division. The Xbox One platform will again be getting 24 hours of playtime before anyone else. The open beta will run from February 16th until February 21st.

Since Xbox One gamers get first access to the beta, this means PC and PS4 gamers can only play it on February 17th until February 21st. The closed beta was over 26GB large so make sure you have some hard drive space saved if you plan on playing Ubisoft’s upcoming new game.

The closed beta was only available to those that pre-ordered or received an invite. The open beta should be available to just about anyone with a PC, PS4 and Xbox One that has an internet connection. If you are still on the fence about The Division, the beta should give you an idea of how the game is like.