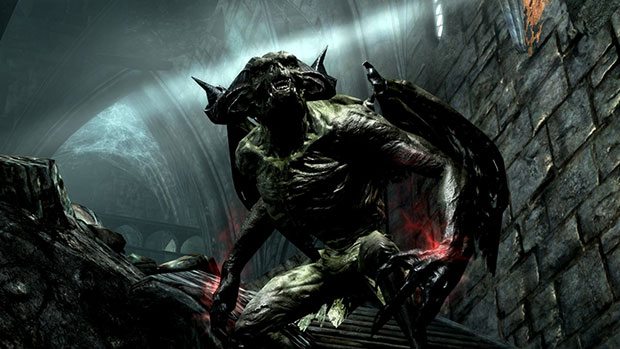 The Dawnguard expansion for The Elder Scrolls V: Skyrim launched quite some time ago on the Xbox 360 and more recently on the PC. The PlayStation 3 is the only console that has yet to see a release of the first Skyrim expansion, something that the developer chalked up to technical issues with the content. Bethesda game studios has yet to issue an official timeline as for when to expect the content, but when it arrives hopefully any issues with the expansion have been resolved.

Bethesda hasn’t elaborated on the types of problems they are seeing with the Dawnguard expansion, but the Bethsoft forums are bustling with activity on all platforms that has players of the Skyrim Dawnguard expansion seeing numerous issues. This could be insight into what problems Bethesda is seeing on the PS3.

On the Xbox 360 players are experiencing numerous problems with the content, these range from issue with loading times, random crashes and freezes of the game, and other problems since Dawnguard released on the console. Some players on the console are even asking if there is any way to revert to previous patches to help fix the problems.

Problems on the PC version of Skyrim Dawnguard seem to be much less prevalent and more user specific due to the varying setups of a PC gamer. As for the PS3, there have been mixed responses to the latest 1.7 update on the console. Some Skyrim players on the PS3 have had little to no problems with the latest patch, while others are experiencing game breaking bugs that have actually made the game worse for them, despite adding mounted combat as a new gameplay feature.

With PS3 fans still dealing with console freeze, infinite load screens, severe lag, texture pop-in, and other major issues, it’s understandable that Skyrim Dawnguard on the PS3 hasn’t arrived just yet. What’s not quite as understandable is the fact that these issues have persisted for the better part of a year.