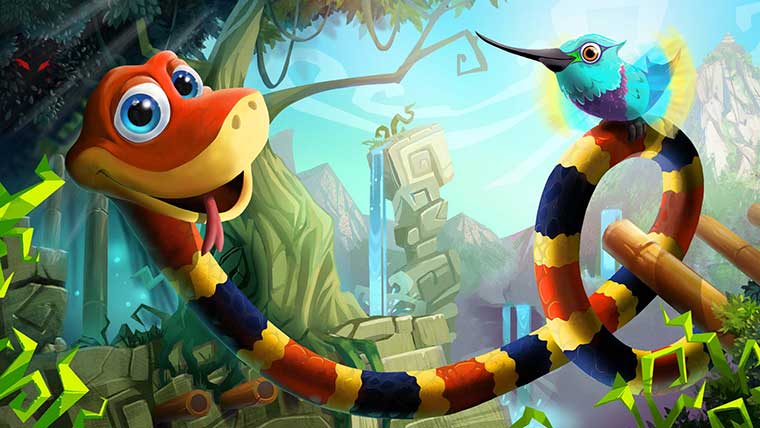 Snake Pass is an adorable platformer where you play as a snake that does not have an eye patch or bandana and navigate the world using your long multi coloured snake body. According to trailer by Sumo Digital, Snake Pass is releasing March 29th for Nintendo Switch, Xbox One, PlayStation 4 and PC. From the looks of things, Snake Pass is going to be a day one title for Switch. Hopefully it is not just there to show off the hardware capabilities like most day one titles, it is hard to tell from this juncture.

The game just looks fun, no other way to describe it. From the art style to the unorthodox method of platforming, Snake Pass just oozes with an almost childlike glee whilst still, by the look of some of those puzzles, maintaining a sense of challenge. Speaking of puzzles, the release date trailer shows off a good bit of those. From slithering across rotating cogs over hazards to maneuvering across jungle gyms of bamboo via some serious twisting and turning. What makes it so facinating is most platformers involve a lot of jumping or the use of some kind of device that works about the same, usually a grappling hook. Tackling a platformer without legs of any sort should be interesting, and rather unique. I do not think many games at all have tried something like this. Whether it works or not will have to be seen when the game is released.

Even the official website has the same feeling of silliness to it. The “s” in most words are elongated in the manner stereotypical of snakes in most media, and the little tidbits often refer to main character’s movement as “snaking”. It is just colourful, silly, and lighthearted fun that frankly games could use more of these days. Also there is a humming bird. How many games have a humming bird?