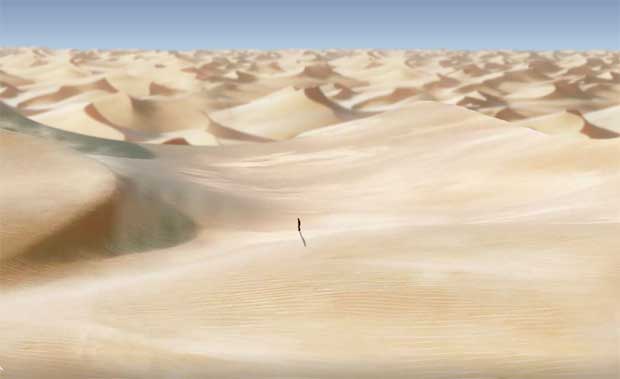 Sony Japan is teasing a mysterious new PlayStation title, that is being shown on page at the PlayStation Japan Website, where a dark figure is making his/her way across a desert.  You aren’t going to get much information from the site, other than this shadowed figure crunching their way through the dust clouds of this deserted landscape, but that won’t stop us from speculating.

Early speculations are towards the games that we know about which have incorporated this desert atmosphere thus far.  Uncharted 3, was revealed with Drake in the desert, and Journey which is a desert themed game that has already been announced and shown on multiple occasions.  It’s a desert bonanza in 2011.

The countdown timer on the site is scheduled to expire on June 1st, so we could hear more about this mysterious teaser then.  Until then, you can play around with the teaser site by panning the camera ever so slightly or even making the little guy sprint for a bit.