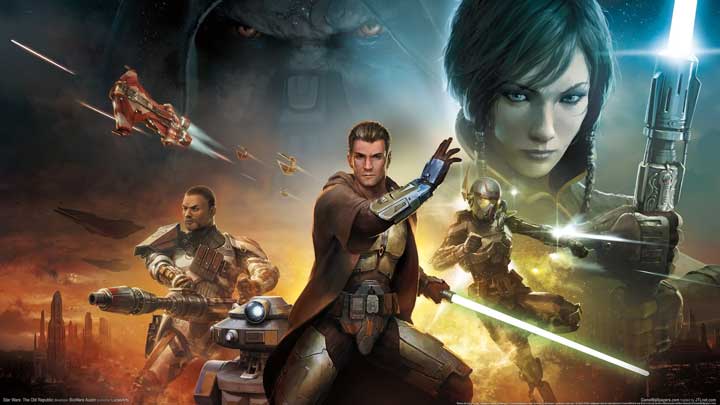 The MMO landscape is a highly competitive segment of the video games industry.  So competitive that many developers choose to offer their content with no upfront costs, and a hope that the game will hook players into purchasing premium content once through the door.  With only a handful of premium MMOs on the market today, Star Wars: The Old Republic looks to join the fray, and carve out a little niche of their own.  This past weekend, we took a multi-day test drive with The Old Republic, all of it’s classes and introductions to the world, and left our time with the beta hopefull about next month’s release.

How you judge The Old Republic will likely be closely tied to where you’re coming from.  If you’re heading over from World of Warcraft, you’ll likely feel right at home with the UI and controls for the game, noticing a significant upgrade to the visuals department however.  Though it’s clear from our time with the game, that Bioware is invested heavily in providing an experience that delivers quality that is unrivaled in the space, and appears that the old addage holds true… You do get what you pay for.

The Old Republic is a beast of a game client.  If you’re going the digital route with the game, be prepared for an extended wait time when downloading the title.  Once you’re in, the second hurdle may or may not rear its ugly head, and that’s server space.  With millions queing up for the December 20th launch, it’s hard to tell if Bioware and EA are prepared on the server front this holiday season.  If they are, and you make into the character selection component of the game, you’re in for a real treat as both the Republic Alliance and Sith Empire have an absurd amount of customization options to craft your character to your liking.  Similar to other MMO’s SWTOR’s class system consists of four characters on both factions, with the option to make them male or female as well.

On the Republic side, you have your Jedi Knight, Jedi Consular, Smuggler, and Trooper classes.  For the Empire you have the Sith Warrior, Sith Inquisitor, Bounty Hunter, and Imperial Agent.  Once you’ve selected your character, you’re journey will begin and here’s where Bioware significantly differentiates itself  from the compeition.  It’s a point of debate with MMO players, but the way that the story is told from your characters perspective is one that has all of the adornments of a traditional game, and aside from the other players that may be on your planet at a given time, you may find yourself feeling that you are playing a more traditional RPG wrapped in an MMO skin.  Depending on which class and faction that you choose, your story will be wildly different and can play out in any number of ways.  There’s definitely a better connection that you get from the story telling mechanics that Bioware uses, but it does come at a price in breaking up the action.

Taking it further into the realm of traditional games, and away from the MMO build used in popular games like World of Warcraft and RIFT, the game allows you to make choices that affect your character down the line.  Being a Bioware game, you’ll recognize the numbered response system in conversations and will be asked to make positive, neutral, and negative replies.  As I said, these responses will definitely have you working toward an ultimate goal of specific gear for your character, and these rewards could have you gearing your responses for the attribute points, instead of your personal opinion on the subject matter.

In the portion of  The Old Republic that I played, I found that Bioware also did a good job with mixing up the mundane, with the engaging, in its quests.  Some could be found to be derivative, but there’s a clear focus on relationships within your inner circle, and a story behind the quests and traditonal mechanics that might appeal to those that aren’t just in it to grind away credits and loot.  There was alot of action in the quests that I played.  With primary objectives being combat oriented, it gets you familiar with what your characters are capable of early on in the game.

The Jedi and Sith warrior classes weild lightsabers and handle exceptionally smooth.  Running in for an attack feels less robotic than it does in other MMO’s and combining and stringing together combinations feels better than it has for a melee class in any other MMO that I have played.  There’s definitely a coolness factor with the Jedi and Sith Warrior classes that is both appealing to the eye, and will get you tripping on the Star Wars vibe right away.  The Jedi Consular and Sith Inquisitor both also have the same feel, but the force is much stronger in these classes as they are able to use their powers to perform energy based attacks with a better range.  The Smuggler and Bounty Hunter classes are the equivalents to what you think when you picture Han Solo or Boba Fett going to battle.  You’re equipped with Blasters, and the ability to use cover to your advantage. The final two classes also use ranged projectile weapons with the trooper feeling exceptionally strong in the early stages of the game.

In the early goings for The Old Republic, it’s explicitly clear that Bioware is trying to focus on you, your character, and your storyline before sending you into the Massively Multiplayer part of this online Star Wars adventure. From what we played, around 30 hours in all across each class, the opening for Star Wars: The Old Republic is strong, especially for those that are looking for more out of there next MMO than what is currently the standard.  But it’s not the opening of this MMO that will keep players coming back and plunking down their hard earned cash month after month. There’s going to need to be a significant late stage draw to get players to keep playing. If they can nail the back-end high level content as well as they have on the front-end, and look for a way to get players together as well as RIFT did.  The Old Republic should have no problem leaving its mark on the MMO world in 2012.