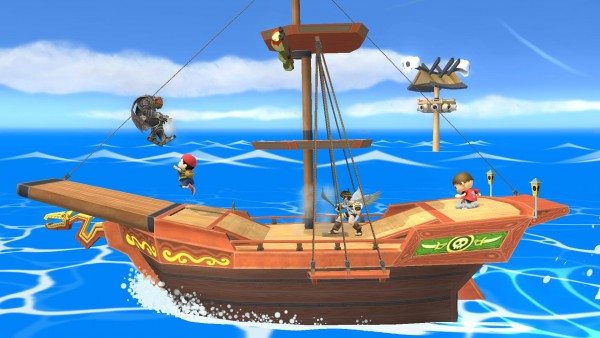 Super Smash Bros. for Wii U and 3DS has been the first entry in the series to receive DLC and Nintendo has been doing a really good job with it so far. After the release of plenty of content already, even more have been released, including two new stages, and a number of new Mii Fighter costumes.

First of all, a new Super Mario Maker stage for both the Wii U and 3DS versions was revealed a couple weeks ago and had a release date of September 30. It didn’t take too long into the 30th for that to go up, along with a new update for the game that has brought new content.

The big news are the stages this time, with the Super Mario Maker stage coming to both versions for either $2.49 individually or $3.49 for both. The big surprise here is the return of Pirate Ship from Brawl, which is based on The Legend of Zelda: The Wind Waker. The bad news is this is exclusive to the Wii U version, but it will only cost you $1.99.

While these two stages require you to pay money, those who own the 3DS version are getting a free stage with this update. The Wii U version had a Duck Hunt based stage and that has now been brought over to the 3DS at no extra cost, even if you do not own the Wii U version.

There are also a number of new Mii Fighter costumes including ones based on Monster Hunter 4 and a charater from Kid Icarus. The full list available includes Business Suit, Toad Set, Viridi Set, Hunter Set, Rathalos Set, Fox Set, and Captain Falcon’s Outfit. Each of the sets are $0.75 for one version or $1.15 for both versions.

The new update is version 1.1.1, but we do not know if anything besides the DLC is here. Hopefully someone can datamine this and find some good secrets, as we saw in the past.