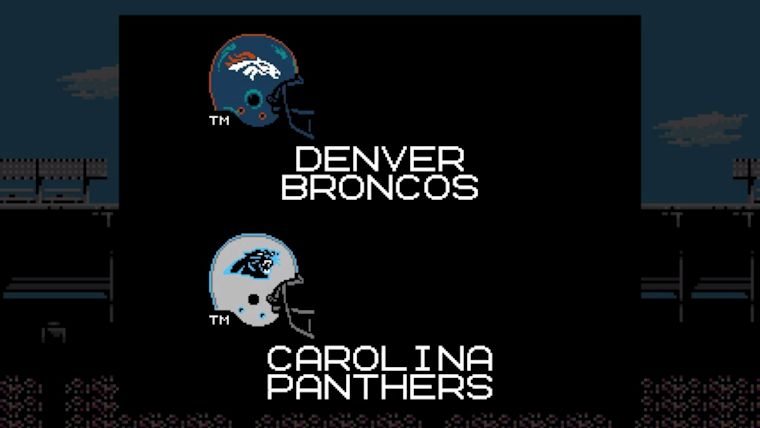 Gamers today get to experience the NFL through the very realistic Madden series, but back in the days of the NES, the Tecmo Bowl series reigned supreme. While the original was fun, the true classic is Tecmo Super Bowl that arrived in 1991 and has had gamers mod the game to update it each year. With Super Bowl 50 less than two weeks away, the site that releases these updated versions each year has now simulated the game to see just who will win.

TecmoBowl.org has been providing gamers with updated versions of Tecmo Super Bowl and other classic games for years, which included them doing their own simulation of the game as well. This is something that EA Sports does with Madden as well, but who doesn’t love seeing the classic in action again?

The simulation has the Panthers getting out to an early 7-0 lead after a long TD pass to WR Ted Ginn from QB Cam Newton, with the score remaining the same after one quarter. The second quarter has RB CJ Anderson making a fantastic catch deep from QB Peyton Manning, but the following play Anderson fumbles while nearly taking it in for a score, which is recovered by LB Thomas Davis. This took the game to the half with a scoreless second quarter and the Panthers still leading 7-0.

The third quarter does not get off to a good start for the Broncos either, as Manning is picked off early by S Kurt Coleman. The Broncos get it back still down 7-0 and get a drive going, but cap it off with a missed field goal by K Brandon McManus. The Panthers start driving at the end of the quarter after a good pass to get into the red zone, which is then followed by a made field goal from K Graham Gano to go up 10-0.

The Broncos don’t give up though, as they get a great run from Anderson to start the drive, which is finished with a TD run from RB Ronnie Hillman to cut the lead to 10-7 with 1:38 to go in the game. The Panthers then do a great job at running the remaining clock, which ends with a TD run by RB Jonathan Stewart to go up 17-7 with 18 seconds to go, clinching their Tecmo Super Bowl 50 victory.

The simulation of Super Bowl 50 was definitely a low scoring affair in the Panthers favor, but we’ll have to wait until February 7 to see if that comes to fruition. If you want to see the condensed version of the simulation, make sure to check out the video for yourself below.