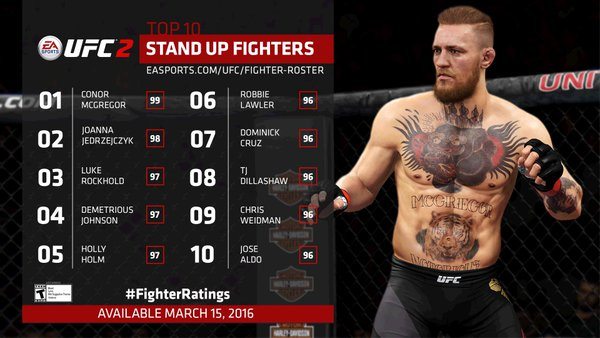 The overall ratings for EA Sports UFC 2 have not been revealed just yet, but we do have a list of the top 10 ‘stand up’ fighters in the game.

If you are unfamiliar with the MMA term ‘stand up’, it basically means hand-to-hand combat. These fighters are the ones that are good at striking and kicks rather than wrestling or submissions on the ground.

The top stand up fighters were posted over on the official EA Sports UFC 2 Twitter page. Stand up is just one fourth of the ratings that will be in the game. The other three ratings are for fighters’ “Ground”, “Clinch” and “Overall”.

In case you are wondering about other stand up ratings, they listed them all in each fighter’s biographies on the official website. Ronda Rousey only has a stand up rating of 87 while CM Punk’s rating is 80. Punk’s overall rating is supposed to be the lowest in the entire game since he has yet to fight in the UFC.

EA Sports UFC 2 will be released on March 15th, 2016 for the PS4 and Xbox One consoles. The full game will have well over 250 fighters in total.