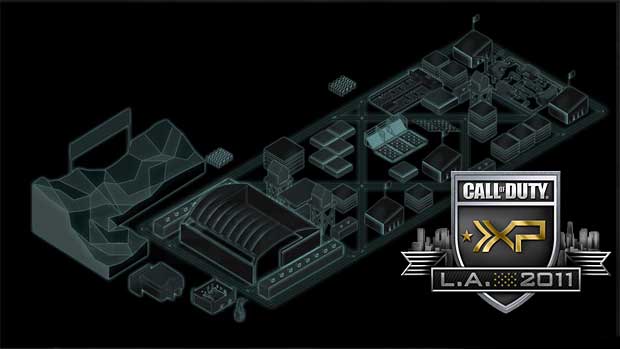 Call of Duty XP kicks off this September when the video game invades Los Angeles to host an event for the fans.  Activision has outlined some of the events that will be held at the upcoming celebration of all things Call of Duty.  From a multi-million dollar tournament and the chance to play Modern Warfare 3 before it hits store shelves, a faithfully recreated paint ball arena that gives fans the chance to play Scrapyard IRL, an obstacle course known as ‘The Pit’ from Modern Warfare 2, and a full on reveal of Call of Duty: Elite among other unnanounced activities at the convention.

The full list of revealed “experiences” have been posted at the official site for the event that went live just a short time ago.

$1 Million Call of Duty Operation – Call of Duty® XP presents the most high-stakes multiplayer gaming tournament ever devised, featuring an unprecedented $1 million in cash and prizes. Thirty-two four-man teams will wage war in a savage single-elimination bracket competition, in front of the cameras and thousands of fans.

Players worldwide will be able to pre-qualify for the tournament with stellar performances in Call of Duty®: Black Ops-check back soon for details. There will be opportunities to qualify on-site as well. Armor up, Call of Duty® diehards. This is your fight.

Prizes – Call of Duty® XP embraces players of all skill levels with numerous gaming competitions throughout the weekend. Hone your breach-and-clear skills in Special Ops, shoot your way to the top in King of the Hill matches or outlast wave after wave of the shambling undead in Zombie Survival mode. Combatants can win prizes from event sponsors like Turtle Beach and Microsoft, and there are surprises in store for Call of Duty® gamers at the event.

Run The Pit – Navigate The Pit, IRL. For the first time ever, players will have the opportunity to speed-run the infamous Modern Warfare 2® training sequence in real life, replicated onsite down to great detail. Prizes and bragging rights are available to top finishers.

Battle in the Scrapyard – Two teams will enter this astonishing real-world recreation of Modern Warfare 2®‘s fan-favorite Scrapyard level. Only one will exit. OK, both teams will exit, but only one will walk away with pride-the other will walk away dripping paint. Massive Modern Warfare-inspired paintball firefights like this happen in only one place – Call of Duty®XP.

Grab a bite at Burgertown – The only thing cooking at this full-scale replica of Modern Warfare 2®‘s beloved Burger Town is lunch, not grenades. Take a break from battle to refuel with a Burger Town Classic or Chicken Burger, crispy or grilled. Burcak’s Sundae shake, while delicious, will not provide immunity to zombies.

Explore the Call of Duty Armory – A unique opportunity to view Call of Duty®‘s vast arsenal in person. Browse weapons and combat gear, Call of Duty® concept art and research, and explore the history of one of the most celebrated franchises in gaming.

The Call of Duty XP Event will run from September 2nd -3rd and tickets will cost $150 each.  All proceeds from the event go towards the Call of Duty Endowment, which is dedicated to ensuring that veterans are provided a clear path to new careers after their military service is complete.