The New Features of Madden NFL 12 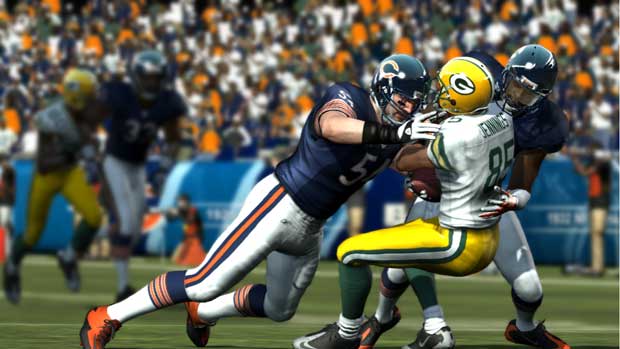 Regardless of whether the real NFL players get back on the field this summer, Madden NFL 12 will be taking the field.  The long-running franchise has made great strides over the past few years, and this year, Madden NFL 12 will add even more new features to the football simulator.  With all of the licenses still in place with Electronic Arts it’s the only football game in town.

EA Tiburon released an updated fact sheet about the game, and what to expect from in Madden NFL ’12

All-New Collision System – Now maintain full control of players up to the point of impact – from tackling to blocking – providing the most authentic collisions in franchise history.  This new system uses a player’s momentum and over 100 new tackle animations, including 40 gang tackles, to provide more impactful hits, stolen tackles, and consecutive hit tackling.

Advanced Defensive AI – Over 100 defensive A.I. enhancements resulting in the smartest Madden defense ever. Players in zone and man coverage will properly recognize and react to plays, including the ability to break out of assignments when appropriate, resulting in a defensive team that truly works together.

Custom Playbooks – The #1 most requested feature by fans in recent years, allows you to build the ultimate game plan by modifying an existing playbook or creating your own by selecting up to 400 offensive or defensive plays from 75 different playbooks. Integrate your custom playbook into a game plan for use with the improved GameFlow system, which executes an authentic, situational game plan for you.

Unprecedented On-Field Authenticity– Hundreds of visual improvements across all areas of the game including: new player equipment, helmet stickers, pylon and ball physics, a player degradation system that affects uniforms and helmets based on weather and field surface, 3D grass, and new player specific animations that showcase the personalities of each NFL player.

Be a Superstar – Control the growth of your superstar thanks to an all-new progression system that allows you to earn skill points by participating in practice and games.  The on-field experience is also enhanced by brand new position-specific coordinator audio that coaches your growth as an NFL player.

Dynamic Player Performance is an all-new feature that creates unprecedented realism as a player’s skills and confidence will rise and fall based on his performance throughout a game or in Franchise mode, just like the real NFL.  No two players will play the same in Madden NFL 12. More details will be revealed at the E3 Expo on June 6.

The perfect combination of Madden NFL Football, fantasy football, and trading cards comes to life in Madden NFL Ultimate Team. More information on how to earn, buy, auction, and trade players will be released on June 20

Online Communities will provide an all-new way for Madden NFL gamers to meet and play.  More details will be released on July 25.