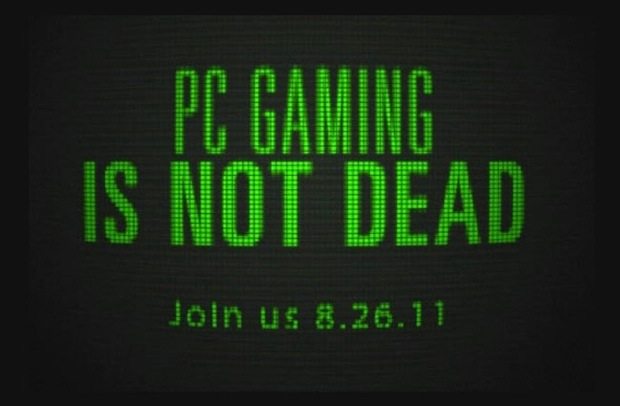 It won’t come as much of a surprise to most of you that consoles dominate this current, modern era of gaming. They make up a majority of the industry’s revenue, and many developers conveniently continue to disregard the PC as a commercially viable platform. What does this mean for a PC gaming peripheral manufacturer? Perhaps that they’re ready and willing to take on just about any challenge that will enable PC gaming to return to its glory days, and this Friday we’ll find out just what that challenge entails.

To put it simply, Razer is stirring something up that will reportedly prove that PC gaming is not dead, but in fact alive and kicking. The company bought a full-page ad in the Wall Street Journal to display how their claims are legitimate:

The rumors of our untimely demise have been greatly exaggerated. We are more than 300 million PC gamers worldwide and this legion is growing every day. Today there are more PC gamers than all console gamers combined and we have been silent in the face of the closed gaming systems that have been propagated.

We, the PC Gamers, have been here since the beginning and have seen the industry grow to surpass movies and music, and we look forward to an open world where console and PC gamers will stand side by side as gamers in arms.

We are here today to tell you, that on the 26th of August, we will seek to end the silence and bring a new age of openness and innovation to all gaming. Together we shall remind you – that PC Gaming is NOT dead.

The mysterious project’s website doesn’t offer any extra details, but it does have a countdown timer that is set to expire on 08/26. Whatever it may be, an endeavor that Razer is putting this much hype and advertising funds into should certainly be enough to peak the interest of PC and console gamers alike. As for the claim that PC gaming is dead, I would say that looking at in-game footage of Battlefield 3 assuredly proves otherwise.