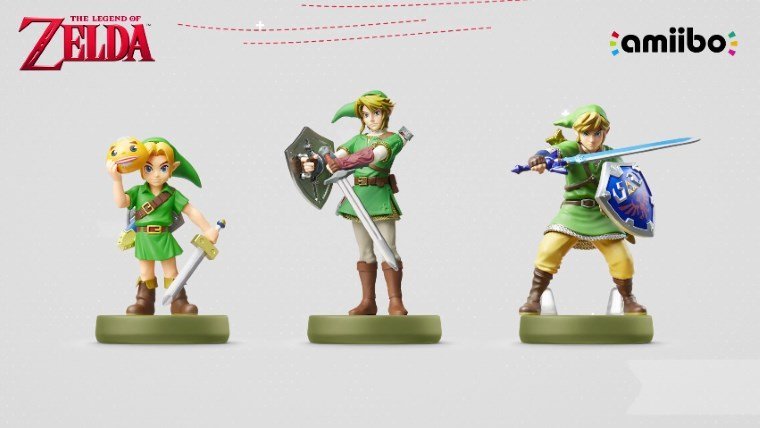 Hope you already got all the Zelda amiibo you wanted, because three new ones were just announced during today’s Nintendo Direct presentation. What was billed as a Splatoon 2 and ARMS video quickly became the amiibo show, with new figures announced for Super Smash Bros., Splatoon 2, and Pikmin. The big bomb for Zelda fans came less than ten minutes in though, with Nintendo announcing three new Legend of Zelda amiibo based on past games in the series.

Majora’s Mask, Twilight Princess, and Skyward Sword will all be getting their own special version of Link in amiibo form. Check them out in the image above. These figures will hit earlier than the rest announced in today’s presentation, arriving on June 23rd.

These particular Legend of Zelda amiibo weren’t announced with any special use, but expect them to work with Breath of the Wild in a similar fashion to the rest of the figures available now. That means more items, including some possible exclusives. Amiibo were the only way to get certain items in Breath of the Wild, including Epona the horse, and many classic weapons and clothing.

Pre-orders haven’t went live for these figures yet, but expect them to go fast. The Breath of the Wild series is still pretty tough to find, at least the more desirable figures. With these being themed after some fan-favorite entries into the long running series, many fans will want these figures, even if they don’t plan to use them with the game.

They do add a lot to the experience of Breath of the Wild though, giving you some really great items in the game. Some have argued that exclusive items shouldn’t be locked away behind amiibo, but Nintendo seems to be going forward with this method, so don’t expect it to change any time soon.