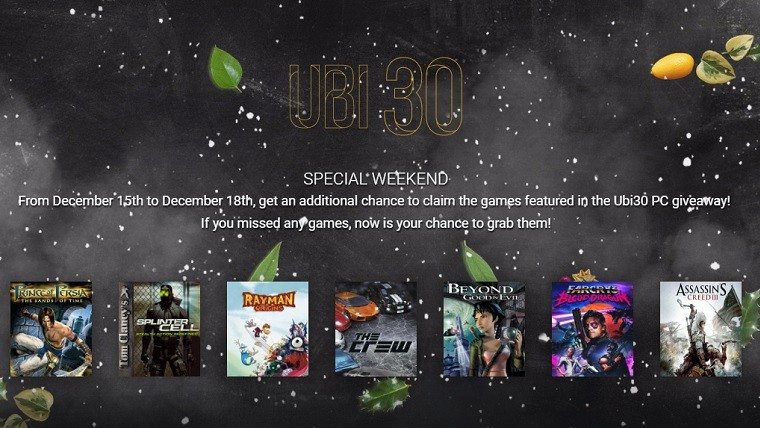 Ubisoft has been giving away one free game each month over the last several months to celebrate their 30th anniversary, with the games themselves spanning their entire career. How it has worked is that one game will be free for a month, and then will be replaced by the next game and so on. However, if you ended up missing any of the free games then Ubisoft is giving you one last chance to get them all for free this weekend.

The company has announced that you will have until December 18th to claim any of the Ubi30 games for free, though once that period is over then they’re gone for good. However, you will still have time to claim the last of the free games from the promotion, which happens to be Assassin’s Creed 3. The other games that were released for free were Prince of Persia, Splinter Cell, Rayman Origins, The Crew, Beyond Good & Evil and Far Cry 3: Blood Dragon.

To go along with the freebies that the company has been giving away, they have also been doing an advent calendar this entire month. Each day they are giving something new away for free, which you can claim by going to the site right here. While some of the freebies have been wallpapers or GIFs, they have been throwing in some free games, as well. Some of these offers are only available for that day, so be sure to check back in daily to avoid missing something good.

While Assassin’s Creed 3 marks the official end of the Ubi30 promotion, the Assassin’s Creed series itself has been put on hold for the moment. While one new main game typically comes out each year, the company decided to take more time for the next one to give the team more time to breathe some new life into the series. The Assassin’s Creed movie will attempt to fill the gap left by the games, which debuts in theaters on December 21st.