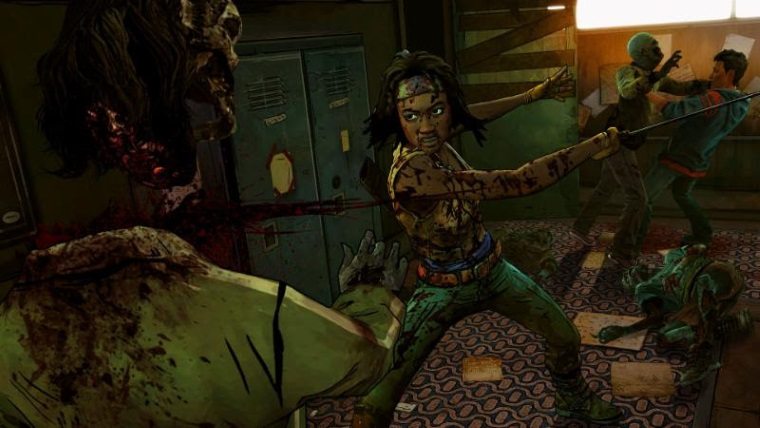 Fans of Telltale’s The Walking Dead will get their first bit of new content for 2016 when The Walking Dead: Michonne launches on February 23rd. The release date was revealed alongside some of the first screenshots shared of the game. This three episode arc will take players away from the action surrounding Clementine and her friends, and take them deeper into the original comic series, which was created by Robert Kirkman.

Taking place between issues 126 and 139 of The Walking Dead comic, Telltale’s Michonne mini-series will actually be taking place far in the future of what is even being presented on the TV show. Of course, this has the potential for spoilers, but with the show deviating from the comic’s storyline in a number of ways, both big and small, there’s no telling where the show will be at when they reach this point in the overall story.

The Walking Dead: Michonne will premiere on February 23rd with the release of Episode 1: In Too Deep. “In this premiere episode, ‘In Too Deep,’ Michonne joins Pete and his crew on the sailing ship The Companion as they cruise the coast for survivors and supplies. When a desperate signal for help draws them to a scene of horrific massacre, Michonne and the crew are lead further to the floating survivors’ colony of Monroe, which may just be harboring the person responsible for the carnage.”

The second episode, “Give no Shelter” is already slated for release this March, making for a much shorter wait time than Telltale games in the past. The finale, “What We Deserve” will then hit in April.

Ahead of the official release date, Telltale will be offering an extended preview of The Walking Dead: Michonne, giving players a look at the first five minutes of the upcoming episode. This event will take place on February 14th at 8:30pm Easter Time on the official Telltale YouTube channel.

The Walking Dead: Michonne will be a three episode event, with The Walking Dead Season 3 already confirmed for release at some unknown point in the future. You do not need to own any of the current seasons of TWD to get into this series, it is a standalone product, which will cost $14.99.