The latest news in the world of video games at Attack of the Fanboy
June 21st, 2015 by Damian Seeto 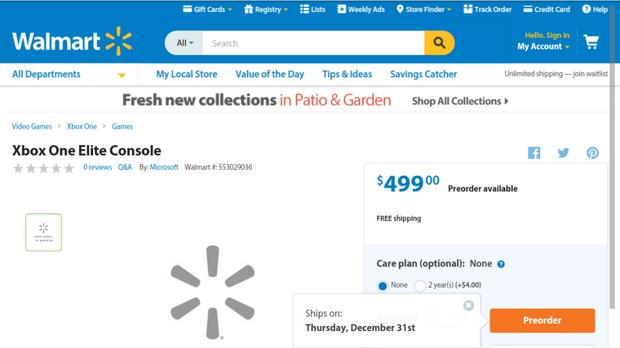 For a short period of time, Walmart listed something called an “Xbox One Elite Console” on its website.

OXCGN posted a screencap that showed Walmart listed the Xbox One Elite Console. The listing has since been taken down, but the screencap is evidence of its existence.

It’s possible Microsoft might announce an Xbox One Elite Console at Gamescom. The company recently said it had too much content for E3 2015 so saved some stuff for other events.

Microsoft already revealed its Xbox One Elite controller. This controller is cool, but a bit expensive at $149.99. If this console bundle is true, the controller could be packaged in.

This makes sense since a normal 500GB Xbox One console costs $349.99 in the USA. If you add the new controller, this will match the $499.00 price that was listed on Walmart.

Alternatively, the Xbox One Elite Console could be just a 1TB console and Elite controller bundle too. It doesn’t appear like the console will have a “slim” version anytime soon.