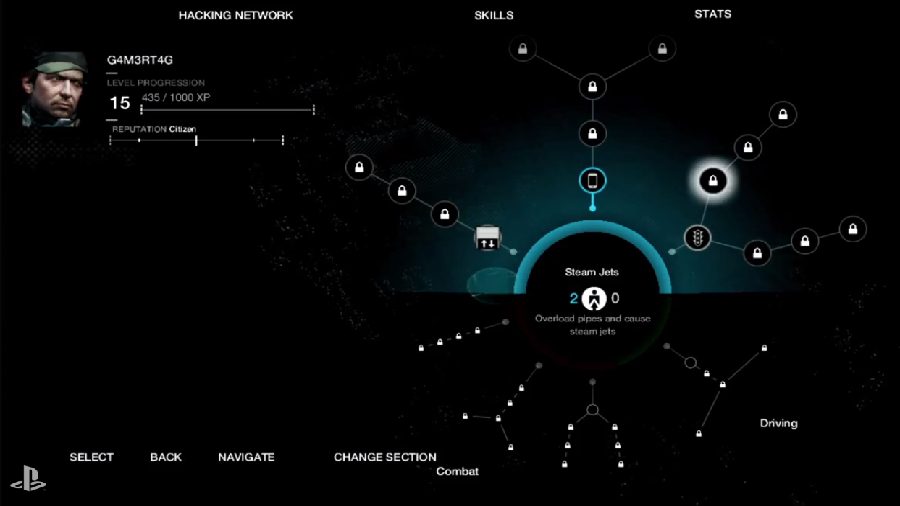 A new Watch Dogs ‘gameplay’ video has been uploaded to PlayStation’s YouTube channel, and is embedded at the foot of this article. The reason that I put the word gameplay in inverted commas is because the video mainly consists of flashy editing of gameplay that has already been shown. Unfortunately, very little new footage is shown, and even less from the view of the player, rather than an exterior angle optimised for suspense. That’s not to say there’s nothing to get excited about however, as there is still lots to enjoy from the 5 minute video.

Entitled “Hacking is Your Weapon”, this is only part 1 of a new Gameplay Series that Ubisoft are revealing. The frequency that they will add episodes is unknown at this point. The two aspects which stand out the most from the video are the location unlocking system and the skill tree which can be seen above.

The first, seen and described from 1:26 onwards, is vintage Ubisoft. Think Assassin’s Creed’s synchronization points or Far Cry 3’s radio towers and you’re on the right track. In order to hack anything that you want, you first have to upload a virus to the area to enable back-door access from Aiden’s all-powerful smartphone. This will trigger a classic blurry area to crystal clear animation which can be seen in the video.

As for the skill tree, not much can be seen, as it only appears for a couple of seconds, but this is the kind of thing hardcore fans of the new IP will go nuts for, so I’ll leave the discovery of potential skills and upgrades to you.

Click here for more Watch Dogs news and information from Attack of the Fanboy.