How Watch Dogs had me humanize NPCs

The latest news in the world of video games at Attack of the Fanboy
June 1st, 2014 by William Schwartz “Out of my way,” I grumbled as I shoved my way past the pedestrians. I get occasional weird glances, but the majority of the people are too busy in their everyday lives to notice. Much like everyone else, I’m on my smartphone. However, unlike everyone else, I’m not playing games, surfing the Web, etc. No, I’m gathering personal information about everyone, information that they hope no one notices. Porn addict? Cosplayer? Celebrity stalker? Transvestite? I know it all. But that’s superfluous information. What matters to me is your money; how much do you make, is your bank account safe? I then notice John Stillworth, makes roughly $100,000 a year as an optometrist and has an unsecured bank account. Bingo. However, just as I’m about to steal his money, I read the other information about him. He’s terminally ill with cancer. I hesitate. “Do I really need the money?” I think to myself. I stand there, pondering whether I should or shouldn’t steal from him. Eventually, he leaves my line of sight. “No,” I figured, “I can just find someone else.” I look back at my smartphone….

One of the interesting aspects of Watch Dogs is how you are given information about every single NPC out there. Despite the fact that they are NPCs and rarely interact with Aiden unless the plot demands it, there is a human element about them. As I illustrated in the above short piece, I had the chance to steal money from John Stillworth. Yet I refused, all over the snippet of information that he’s terminally ill with cancer. 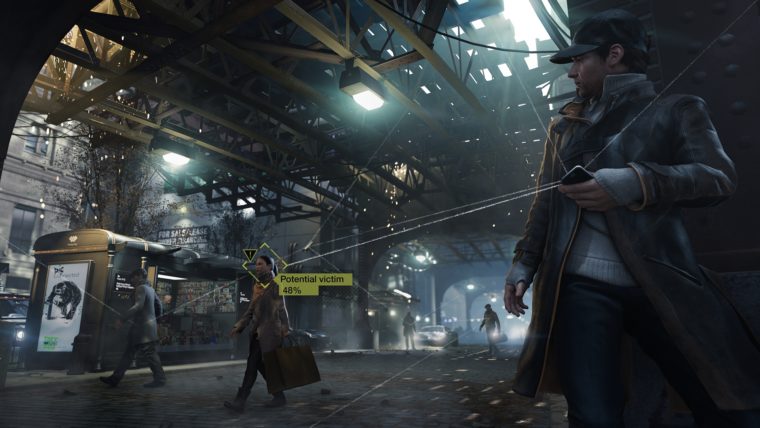 It shouldn’t have mattered, the fact that John was terminally ill with cancer. He’s just an NPC with a randomly generated name and randomly generated snippets of information about him. While there may be a real John Stillworth who’s an optometrist and is terminally ill with cancer, in this game he’s a nobody. There are thousands of NPCs in Watch Dogs all with little to no personalities. Yet, that snippet of information made all the difference. If John Stillworth were an optometrist who stalked ladies in his free time, I’d have absolutely no issue stealing money from him, in fact, I would see it as retribution, as karma. All over a snippet of text, that you have no way of verifying is true or not.

Probably the most interesting aspect of Watch Dogs is that it humanizes NPCs without really “trying to”. That is, there is no omnipresent Karma system, like Fallout 3, or Chaos system, like Dishonored, that rewards or punishes your behavior based on how you interact with NPCs and subconsciously tries to influence your decision. Sure, there’s the Heat system, but it’s based on how you interact when in public. As an example, if I were to steal money from John Stillworth, he’d be none the wiser. Sure, he’d notice his bank account has lost money, but he’d have no way of tracing it. And that’s reflected in the Heat system, where nothing changed. Compare that to Fallout 3, where it doesn’t’ matter if the NPC noticed you or not, your Karma will go down. Or Dishonored, where it doesn’t matter if you stealthily kill every guard or simply knock them unconscious, the all-knowing Chaos system will take notice and change accordingly. Yet compared to those games, I feel a more human connection to the NPCs in Watch Dogs. As such, I feel much more guilty when innocents die in Watch Dogs as compared to Fallout 3. (In fact, randoms dying in Fallout 3 is essentially free loot. Of course, the whole idea of looting off of dead corpses is rather socially stigmatized, except in games.) However, Watch Dogs isn’t perfect. While I may be a vigilante in free-roam, Aiden is not. That is, the plot of Watch Dogs has Aiden as a merciless man out for revenge. This is what I call ludo-narrative dissonance. That is, the actions and mechanics of the game do not mesh with the plot. Aiden doesn’t care about the collateral damage, yet I do. Aiden is more than willing to brutally harm those he suspects aided in the death of his niece, yet I try to resolve most conflicts peacefully or with minimal bloodshed. There’s a dichotomy between what the plot wants and what I want.

Despite the problems, there is that aspect of Watch Dogs that is beautiful. Seeing how you, the player, react given information about a person is something that hasn’t been really explored until now, and is something I hope gets expanded upon in the future.

Home / Game News / How Watch Dogs had me humanize NPCs