Watch 8 Minutes of Resident Evil: Revelations on PS4 and Xbox One 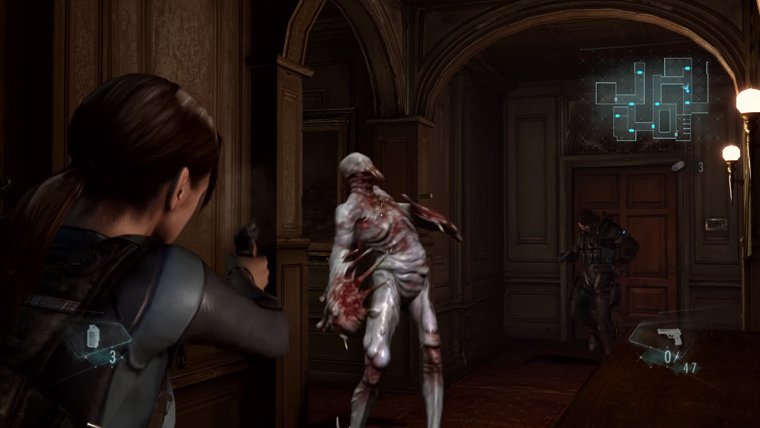 Capcom has released new gameplay footage of the version of Resident Evil: Revelations for PlayStation 4 and Xbox One, in the form of two videos showing action and exploration scenes. The footage is a good indication of the improved graphics of this version, and they focus on main character Jill Valentine exploring the cruise ship Queen Zenobia and fighting mutant creatures infected with the T-Abyss Virus.

Both videos prove that the game runs at 60FPS on PS4 and Xbox One, which is a clear improvement over the performance locked at 30FPS of the PS3, Xbox 360 and Wii U versions. Apart from more fluid graphics and sharper textures, the game is exactly as you remember it, with the same controls and mechanics of the previous versions.

Resident Evil: Revelations features Jill Valentine and Chris Redfield while they embark on a mission to investigate the new creations of Umbrella aboard a cruise ship. The game, was conceived as a return to the horror atmosphere of the classic entries, even though it would adopt the same controls of the Resident Evil 4 – 6. Jill and Chris have each their own separate storyline, although they are accompanied by fellow BSAA agents Parker and Jessica respectivelly. However, they only act as support characters, as the game doesn’t offer a split-screen multiplayer option.

The game was originally released as a Nintendo 3DS exclusive, but over time it has been ported to PC, PS3, Xbox One, Wii U and now the current gen consoles. This is part of a new strategy by Capcom which seeks to get extra revenue from re-releases of previous games. The latest financial report revealed that the re-releases of previous Resident Evil games had all passed 100.000 sales in the last quarter, making clear that this is a profitable strategy for them. Resident Evil Code: Veronica X has also been released on PlayStation 4 recently, in the form of a PS2 Classic.

Resident Evil: Revelations will be released on PS4 and Xbox One on August 31 in Japan, with the Western release following shortly after.