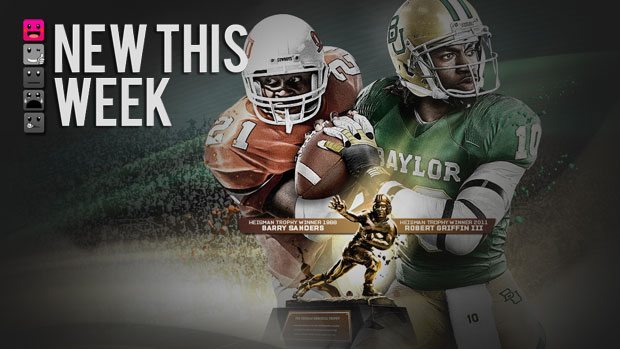 NCAA Football 13 – Xbox 360, PlayStation 3 – NCAA Football 13 is an American college football game in which players are given the ongoing opportunity to enjoy the collegiate game in multiple ways. Experience the rise to dominance of a young, up-and-coming gridiron star hoping to make his way to a college superpower of choice and eventually a national championship. Experience the pride and pageantry of gameday Saturday like never before as you go from high school superstar, to top college player, to head coach in Road to Glory and Dynasty modes. With a new passing system, new team-specific traditions, and the Heisman Challenge, make an impact by leading your team to the National Championship with NCAA Football 13.

Rainbow Moon – PlayStation 3 – The residents of Rainbow Moon who have found themselves in this sudden and unpleasant situation react suspiciously and even nastily, which certainly doesn’t make things any easier for our brave hero. There’s only one thing for Baldren to do: he has to seal the gate and warp himself back to his home planet. This is easier said than done, since the gate can only be sealed by a dimensional gate staff and no such object is available anywhere on Rainbow Moon. However Baldren knows that he can create one if he finds the right materials. He needs seven magical artifacts, said to be hidden deep inside Rainbow Moon’s dungeons.

Dungeon Fighter Live – Xbox 360 – Hack-and-slash action and 2D side scrolling meet multiplayer mania in Dungeon Fighter LIVE: Fall of Hendon Myre. Take on the role of three classic Dungeon Fighters—Slayer, Gunner, and Fighter—to defend Hendon Myre from monsters spreading Phantasmalia. Customize your heroes by creating and enhancing gear, and deliver unique attacks by chaining and combining skills, all while playing with up to 4 players on the same console or via Xbox LIVE!

Quantum Conundrum – Xbox 360, PlayStation 3 – When you arrive to visit your uncle, you notice something’s wrong. He’s not there to greet you and there was an explosion just as you arrived. Rescue your uncle using his newest invention, the Interdimensional Shift Device. Shift between five different dimensions in real time and work your way through his crazy complex mansion!

Rhythm Thief & The Emperor’s Treasure – Nintendo 3DS – He’s the Robin Hood of modern-day Paris. A thief by trade but a hero at heart, Raphael is a mystery to his Parisian neighbors, who are continuously entranced by his peculiar deeds. Why would anyone steal paintings just to return them a few days later?

Ice Age: Continental Drift – Xbox 360, Nintendo Wii, 3DS, DS – Ready to get wet, wild and wooly ? Team up with your favorite Ice Age characters in a continental competition of glacial proportions! Battle for treasure with the Herd and the Pirates in their craziest adventure yet!

Get Up and Dance – PlayStation 3 – Get Up And Dance is the ultimate dancing game for everyone to play, whether you are the star performer or prefer to stay out of the limelight as a backing dancer, Get Up And Dance is for you. Featuring everything from classic funky disco tracks to current chart hits, all complete with their official videos, there’s something for everyone to enjoy!

Zuma’s Revenge – Xbox 360 – Experience new levels of ball-blasting action! Leap in and conquer 69 levels of Adventure mode. Discover four new Spirit Animals (at least one of them is a monkey!) and harness their abilities to power up your game. Dive in to the high-stakes Iron Frog mode: 10 levels, one frog. Can you make it out alive? Battle all 8 tiki bosses in the fast-paced Boss Rush. Enter the Weekly Challenge and compete for high score on a new level every week.