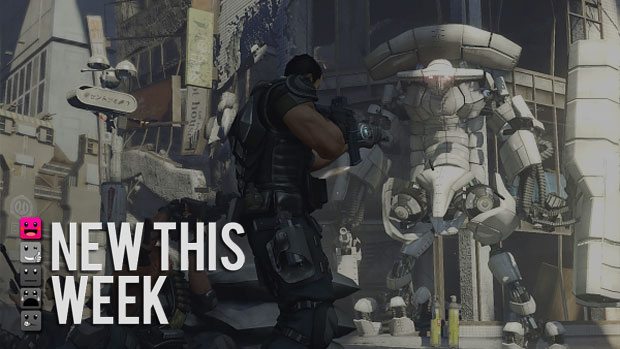 Binary Domain – Xbox 360, PlayStation 3 – Binary Domain is an original squad-based shooter by Toshihiro Nagoshi, the creator behind some of Sega’s most well-known video game franchises, including the critically acclaimed Yakuza series. Campaign play in Binary Domain features a trust based system in which the maintenance of relationships developed with AI squadmates are crucial if they are to follow orders. The game also features full destructible robot enemies, a wide range of weapons and a robust range of online multiplayer options.

Killzone 3 F2P Multiplayer – PSN – In the wake of Visari’s death, Helghan has devolved into a world of political scheming, rapid infighting, and murder. Now, the two most powerful men on Helghan are fighting for complete and utter dominance while Visari’s vision of Helghan is in jeopardy. With limited supplies and no re-enforcements, the ISA must now fight not to win a war, but to survive a lost one.

Nexuiz – Xbox 360 – For centuries the Kavussari and the Forsellians have waged war. They have a fragile truce but due to their seething disgust of each other they still pit their warriors against each other in arenas rather than on the fields of war. Those episodes of lethal combat are now broadcast throughout the galaxy, as entertainment… a spectacle known as… The Nexuiz Competition: An arena based first person shooter where you can alter the rules of the match and laws of physics while you dominate opponents in ever-changing hostile environments bleeding with hatred.

SSX – Xbox 360, PlayStation 3 – SSX is a snowboarding game for Next-Gen game consoles that continues the over-the-top Arcade style fun that the long-running SSX franchise is famous for. The game features racing and trick gameplay both in single player and multiplayer options, with runs set across the mountains of the world using real-world NASA topographical data. Additional features include: new and returning franchise favorite characters, global events and the ability to race against ghost images representing a friend’s time on a run, real-world conditions like avalanches, rockslides and freezing temperatures, and more.

Order Up! – PlayStation 3 – See if you can run your own business without running yourself ragged in this restaurant sim that serves up addictive fast-paced action with a heaping side of frantic fun! Wait tables, cook food, and deal with hungry customers, doing your best to keep them happy and build the reputation of your new restaurant, Kung Fusion. Serve up tasty Asian fusion dishes in quick and quirky single-player action, split-screen co-op, or turn-based head-to-head multiplayer. Use classic Six Axis controls or PlayStation Move controls in a challenge where every table is a wacky new adventure.

Microsoft Flight – PC – “Microsoft Flight” is a new PC game from Microsoft Game Studios. The new title will be available on the Games for Windows – LIVE service and will bring a new perspective to the long-standing “Flight Simulator” franchise. From new game play elements and enhanced scenery and terrain to new aircraft and integrated content marketplace, it is an entirely new breed of virtual flight. The Games for Windows – LIVE platform sets the stage for all your virtual flight needs while connecting you to a global base of users, content and endless exploration. Microsoft Flight builds off its heritage of deep, immersive simulation and is redesigned to make the experience easier for virtual fliers of all interests and skills.

Vessel – PC – Built on a groundbreaking liquid-physics engine, Vessel will allow players to solve puzzles by bringing to life physically-simulated liquid (water, lava, glowing goo, chemicals and more) by animating them into living machines called Fluros that retain all the properties of the liquid they contain. Using the unique technology of the Vessel engine, these liquid creatures are like no other character in video games; each possesses a body composed entirely of physically simulated fluid that allows them unique abilities that include melting, reforming, mixing with other types of fluid, and re-growing lost limbs. Combining the properties of each fluid type with the behaviors of the liquid creatures that it comprises, players will be able solve puzzles and progress in this fantastic mechanical world.