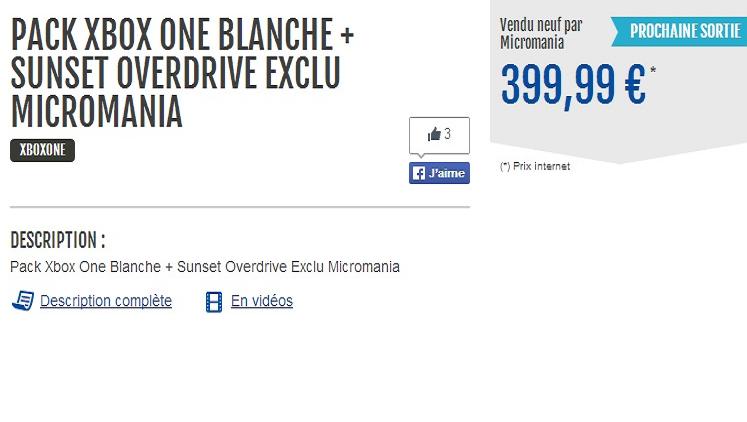 A year ago, a special white Xbox One console was only available for Microsoft employees. It looks like the public may have a chance to own one later this year with Sunset Overdrive bundled.

French gaming website XboxYGen has reported that French retailer Micromania is listing a white Xbox One bundle. No picture was given, but the listing said “Xbox One Blanche”. If you don’t know, blanche means white in French.

It’s also worth noting that this White Xbox One bundle is also being packaged with Sunset Overdrive. It has a release date of October 28th and is priced at 399,99€. Microsoft has yet to announce this bundle, although they might reveal something at Gamescom later this month. After all, Gamescom is held in Europe. Hopefully the console gets a worldwide release if this retail listing turns out to be true.

A white colored Xbox One will compete with the same colored PS4 being offered with Destiny. Sony’s bundle is coming out on September 9th. It’s the only other color being provided for the PS4 at the moment. From October, both PS4 and Xbox One will have black or white versions you can choose from.

Which bundle seems more appealing to you? The rumored Xbox One with Sunset Overdrive, or Sony’s PS4 with Destiny?