The latest news in the world of video games at Attack of the Fanboy
August 30th, 2017 by Jennifer Locke 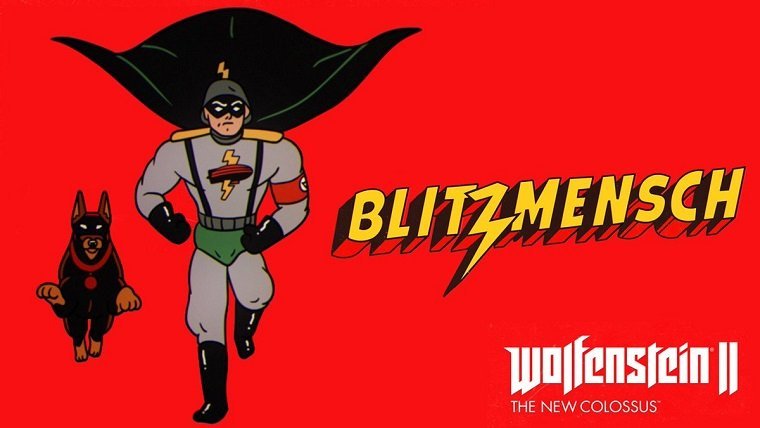 Bethesda continues to nail Wolfenstein II’s marketing with a new propaganda-filled cartoon trailer. Wolfenstein II has received some fantastic trailers lately, but nothing quite like the one seen below.

In similar fashion to old-timey superhero cartoons, we get a montage of an everyday human obtaining superpowers by being struck by lightning and saving the city from evildoers. This time though, the hero is depicted as an Aryan Nazi-like figure who takes down bad guys like the evil Money Grubber and vicious Mr. Yankee Monkey.

Its description says, “Blitzmensch and his partner Fräulein Fox save the world from capitalism, communism, and degenerates every day in this amazing show celebrating die Überlegenheit – the superiority – of the Reich and the Aryan race.” This is a cartoon plucked straight from the world of Wolfenstein II, so it gives a good look at how propaganda is meant to brainwash the characters.

The end of the video contains clips from the actual game that have been included in a lot of promotional material before, but it’s nice to see the high-octane action with the cartoon’s classic superhero music playing over it.

Wolfenstein II: The New Colossus releases on October 27, 2017 for Xbox One, PlayStation 4, and PC.