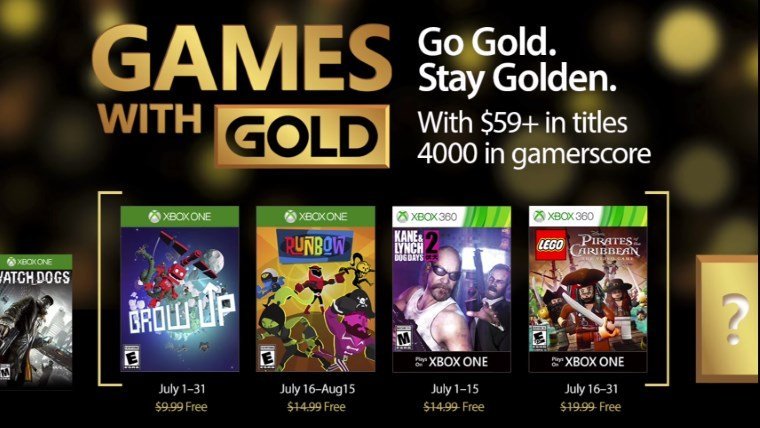 The selection of free Xbox Live Games with Gold titles for July 2017 have just been revealed by Microsoft. Four new games will be available at intermittent times throughout the month. This month seems to offer up some nice indie games for Xbox One, including a brand new title. Meanwhile the Xbox 360 selection is more AAA style, including a nice LEGO games.

Here’s the Xbox Live Games with Gold free games for July 2017: Grow Up for Xbox One, Runbow for Xbox One, Kane & Lynch 2 for Xbox 360, and LEGO Pirates of the Caribbean: The Video Game for Xbox 360. The second games listed for each console will become available for free halfway through the month, so be sure to check in both times to snag all of your games.

As usual, the Xbox 360 offerings will also be available to play on Xbox One via Backward Compatibility, so be sure to add them to your account, even if you don’t want to play them right away. These monthly giveaways are best at expanding your library’s options, rather than supplying a new game to play right away.

This month isn’t one of Xbox Live Games with Gold’s best, but we’ll have to wait and see what Sony offers for PS Plus members before we declare who had the better month.